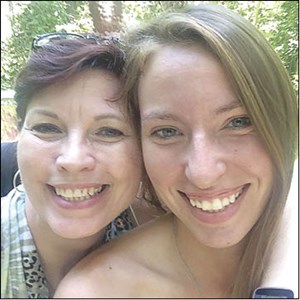 BY HOLLY MCCRAY
In the days after Hurricane Maria, it took the connections of Oklahoma United Methodist Volunteers In Mission to get Chelsea Riley on a plane out of Puerto Rico. A new job in Spain awaited her; her parents in Oklahoma wanted her off the storm-shredded island.
Still she felt that she abandoned the place she’d called home for two years.
Chelsea is the daughter of Mike and Sonja Tobey, who is pastor at Prague and Arlington. This PK (preacher’s kid) completed her degree at Oklahoma City University in December 2014 and moved to Puerto Rico in late summer 2015.
Now in southern Spain, she’s an assistant teacher and conversation aide at a secondary school. She’s a freelance photographer. She’ll enter the master’s program “Production and Investigation in Art” at the Universidad de Granada.
From Spain, she shared via email her firsthand experience with the weather monster that made landfall Sept. 20 in Puerto Rico.
“I had been planning to move to Spain since January,” Chelsea said. “It occurred to me to leave before the storm, but was not an option in my mind. I had weathered one hurricane (Irma) that month. I would weather another, take care of my friends, and not have to make extra reservations, car rentals, extra travel expenditures.”
Oklahoma tornadoes always fascinated her.
But “with a hurricane,” Chelsea learned, “it doesn’t form in an instant. It carries such an incredible momentum, an astounding amount of water, and uninterrupted winds from over the ocean.
“All in all, it stormed for about 18 hours by my count.”

Chelsea and friends lived in a house near San Juan, Puerto Rico.
“Preparing your house for a hurricane is very similar to preparing your house for a tornado; it’s preparing the resources you will need to live on afterward for an unknown amount of time. So it was a group effort to prepare, to gather food, water, flashlights, etc. Between all of us, we had two gas stoves and a grill for cooking.
“I did not have a generator, nor did I feel I needed one. I sleep just fine normally without an air conditioner. To be honest, my main concern was coffee; I’m a wee bit caffeine-addicted.
“Since we had just had Hurricane Irma pass through (Sept. 5), most of the house was still hurricane ready. Everything loose was inside. We moved everything from the windows and put a plank of wood in front of the glass doors. Every other part of the house was hurricane windows or solid concrete.”

“I woke up around 5 a.m. to astounding wind and my upstairs flooding. The balcony had accumulated so much water and leaves that it wasn’t draining. There was half-a-foot of green water on the other side of the glass doors, which were making a horrible curved shape that I did not trust AT ALL.
“I’ve never seen glass do that. I hope never to again.”
She braced the doors with a table, piled towels and blankets before them, and “then just watched it pour.”
Chelsea said, “I was calm, but awfully contemplative. Everyone was. My mind was somewhere between worst possible scenario and feeling that storms like this are only going to get worse in the future. We have done a lot of damage to the earth.”
One friend complimented her for reinforcing the doors, but also warned her to expect even stronger winds. “We both knew if he was right, the doors would break.”

Once the hurricane moved on, Chelsea said, the group went outside and found “my home was OK. We checked on our whole neighborhood.”
“The damage was unbelievable.
“The lush tropical trees were stripped of leaves and downed like a logging company had rolled through. All you could hear were chainsaws hacking away at the fallen aguacate (avocado), panna (breadfruit), and other trees, clearing the streets.
“We went to work seeing who was trapped or couldn’t get out of their streets.
“The community came together in amazing ways. I grew to know that I lived in a community of fantastic, talented, caring individuals. Even through a humanitarian crisis, the people of Puerto Rico are some of the best neighbors, friends, and coworkers I have ever had.
“I was never scared. I was confident in the compassionate and vibrant community of people who would go out of their way to help you if you needed anything, whether you spoke their language or not.”

Two days after the storm, Chelsea and her friends carefully drove to the airport, still closed to flights but the one place on the island that had cellphone reception, she said.
“We all called our families to let them know we were safe, which brought lots of relief and lots of tears.”
Then they returned to the house. Among the group: a cook, two bartenders, a marine biologist, and a property manager for a home-sharing vacation site.
“Nobody went hungry,” but what seemed in light moments like a camping trip stretched much longer.
“Ultimately my house became hurricane quarters for several of my friends and co-workers. I had two extra people staying with me for a long time as we tried to figure out how to live and gather resources.
“We spent days doing what takes people minutes.
“The lines for resources were insane. We waited nine hours in a line miles long to get gas, and each person could only get $20, all supervised by military police. We waited three hours in line for an ATM, only to have the machine run out of money. Since we had no form of communication, really all we knew were rumors of relief efforts.”
Chelsea knew she soon was going to work in Spain, but many people were jobless. “Everyone is hoping their savings lasts until they can go to work again. Who knows when that is?
“Personally, when I felt most poignantly the situations that other people were facing — damaged houses, lack of water, no means to provide for their families, stranded without gas, uncertain about the whereabouts of their families, injuries, and grieving the loss of loved ones, to name only a few — I cried to my mother that I felt like there was nothing I could do.
“All I wanted was to open a food truck with free food and move from place to place, cooking for people with my restaurant-savvy amigos. But this never happened.”
She said she regrets that.
“If I hadn’t had this job lined up, I would have rather spent my savings helping the economy recover and maybe open that food truck after all. We could have made amazing paella for people at the beach. We could have done something small, to feed people.”
She described a heartbreaking scene at the airport as she waited to leave.
“A little, little girl — maybe 3 or 4 years old — was bawling in her mother’s arms. José, one of my closest friends, said, ‘Her daddy is leaving to go find work in the states, to take care of them.’
“This will be heavy on my heart forever. Later, talking with José, remembering that experience, I told him that a hurricane does more to scatter people than objects.
“Most of my friends have left or are planning to leave the island.”

Extreme events in nature cause some people to question the existence of God, the goodness of God, or the power of God. Chelsea said she thinks differently.
“Disasters happen, but we are too intelligent to not understand and empathize with the disasters of the world, manmade or natural. So my faith doesn’t question an all-powerful god.”
Instead, her questions are: “What is our response to the divinity in the world? How do we care for it, create an amazing earth in every action we take?
“These questions, for me, have to be answered by us. And it starts with taking better care of the world, having respect for our resources and water, and understanding that wasting resources is no longer an option.
“The people of Puerto Rico are exceptionally resourceful and are consistently appreciating the beauty and provision their tropical paradise provides. They care deeply for their island and were devastated to see the rainforests and fruit trees in shambles post-hurricane.
“Today my heart is hopeful, but the Caribbean islands have a long road to recover. I love UMCOR (United Methodist Committee on Relief), VIM, and I am proud to say I have been a part of these organizations and support their endeavors.”

Hurricane Maria wrecked Chelsea’s scheduled departure from Puerto Rico. Days passed before the airport partially reopened at San Juan. The few flights were full.
Yet she faced a deadline to start her job in Spain.
“Finding a plane ticket off the island seemed to be impossible or at the very least extremely expensive. I was fervently calling my mother, asking for updates from my airline and to help make travel arrangements for me.”
In Oklahoma, Rev. Sonja Tobey appealed to Facebook friends for advice. Among those responding was Jeremy Basset, director of the Oklahoma Conference’s Office of Mission.
Rev. Basset shared the next part of this story.
He suggested the anxious mom check with VIM’s travel agent. But he knew getting a plane ticket was highly unlikely in the tumult after the disaster.
He gives God full credit for an extraordinary outcome.
During a phone call with Sonja, the agent saw one seat suddenly become available among the flights being monitored.
An unknown traveler had cancelled. Chelsea’s departure was secured.
“Yes, there is indeed a happy ending here in Spain!” Chelsea said in late October. Her cat hadn’t yet settled into apartment life in Spain, “but who could blame him? He used to run around a rainforest all day.”
Thanking both the agent and VIM, she added, “My students here in Spain are grateful, too, as they were anxiously awaiting my arrival.”
Her gratitude for VIM “runs deeper than that. I am so grateful for all the tremendous work they do for people in need all over the world, when governments and other organizations fall short.”
She noted, “I love Puerto Rico. It’s the most amazing place I have ever seen, and I would love to live there and enjoy its beauty again.”

Donations totaling $385,000 for UMCOR Advance No. 901670 were received in September and October by the Oklahoma Treasurer’s Office from Oklahoma churches.
As VIM teams prepare to deploy to help hurricane survivors in Texas, Louisiana, Florida, and eventually Puerto Rico, you can serve now in solidarity with them by helping flood victims right here in Oklahoma, as Bishop Jimmy Nunn encouraged in a recent video. Learn more at www.okvim.org.