A February trip to his native Liberia held triple meaning for Bishop Bennie Warner, who lives in Oklahoma City.

Main purpose was to witness the Feb. 18 dedication of the cornerstone for a new school: the Kaymah H. Warner New Hope Academy in Margibi County. Kaymah, daughter of Bennie and Anna Warner, died in 2014.

Another purpose was to attend the Liberia Annual Conference of The United Methodist Church. Also while Bishop Warner was there, Bishop Arthur F. Kulah asked him to be the best man at Kulah’s wedding. The two friends are both age 80.

The visit created yet more memories of Liberia for Warner, who learned to read at 15 in a Methodist mission school, went to college, pastored churches, was elected bishop there in 1973, and in 1977 became vice president of the Republic of Liberia.

His life changed dramatically when Liberia’s president was executed during a coup, in 1980, while the Warners were visiting the United States.

With conditions too difficult to continue in ministry in Liberia, they relocated to the United States. Warner returned to the pastorate, leading churches in New York, Arkansas, and Oklahoma.

Now retired, Warner dedicates himself to raising money for completion of the school, which will have 10 classrooms for grades pre-K through nine, each with room for 35 students. Warner said construction likely will take another year to complete and calculates that an additional $21,700 is needed to install ceilings and classroom doors.

He expects the school to draw students from 14 villages nearby.

Warner noted that the school is necessary because the available government schools aren’t large enough to meet the need to educate all Liberia’s children.

New Hope Academy is being built on 50 acres of land donated by the Warner family. A dormitory for students and housing for staff will be built later. Nephews and their families live on the grounds to look after the property.

The facility also will help the area in other ways, because the school will include a library and clinic for the community, Warner said.

The school has a large solar-power generator and expects to produce enough power eventually to sell some of it to surrounding villages, creating income for the school, said Jeremy Basset, director of the Oklahoma Conference’s Office of Mission. He also attended the February dedication.

Rev. Basset said he has been "deeply moved by Bishop Warner’s commitment to his home community … knowing how important education was for him."

This school also has been a labor of love for several Oklahoma United Methodist churches, including Blanchard, Mustang, and OKC-Mosaic. Victory Memorial UMC in Guymon has sent volunteers to Liberia to help with the construction, Warner said. Fundraisers in Oklahoma have included an international fashion show and tea at OCU in 2011.

Building the school was something that Kaymah Warner wanted to see come to fruition, her father said.

"She’d be excited to know that all the plans are being materialized. She would be happy her name would be remembered," he said. 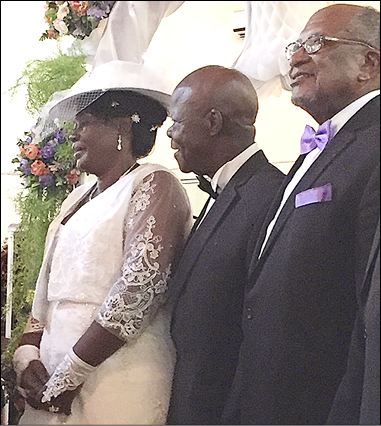 From right: Bennie Warner of Oklahoma City serves as best man at the February wedding of Bishop Arthur Kulah and his wife Gloria in Liberia. Upon learning Warner was in the country for the school dedication, Kulah invited him to be in the wedding party. 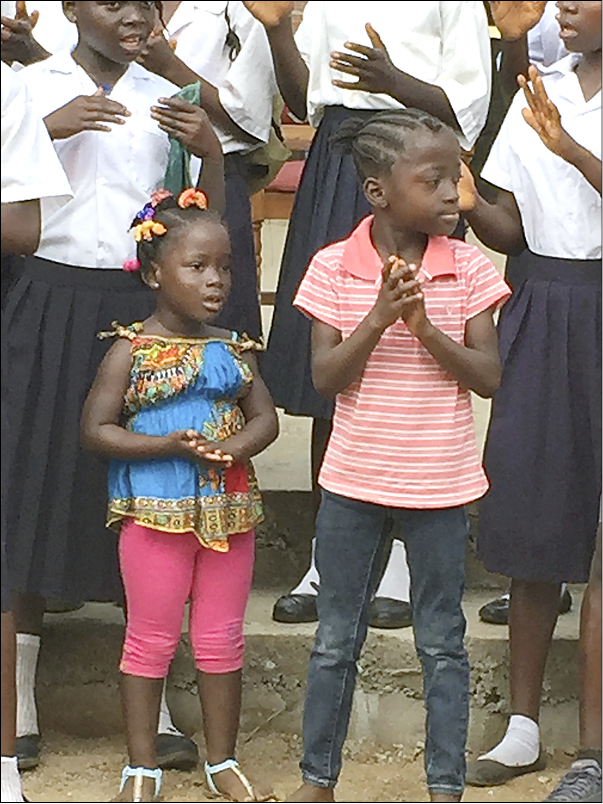 Students sing in a local dialect on Feb. 18 at a ceremony for Kaymah H. Warner New Hope Academy, under construction in Liberia.

Oklahoma’s standard flies among an array of flags in front of the Kaymah H. Warner New Hope Academy in Liberia on Feb. 18, the day the school’s cornerstone was set. Seen at right is an arbor to shade guests during the dedication. The school is named in memory of the daughter of Anna and Bennie Warner, a former Liberian United Methodist bishop, now of Oklahoma City.