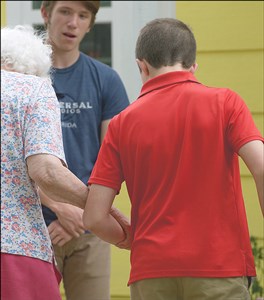 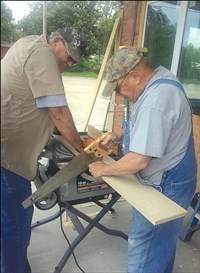 Keith King met the “tech angels” when Youth Force volunteers tackled a crumbling home that didn’t even have window glass.
Sometimes home work exceeds the capacity of the mighty teen forces for good that make home repairs in Oklahoma each summer. Expert help is needed.
In Ada, Youth Force Director King counts on three men from Duncan-First United Methodist Church: Earl Weisner, Jim Matthews, and David Dowell.
Dubbed the tech angels, the retirees supported the young people as the “God squads” renovated several homes and a church in June.
“They’re good guys with good hearts and great carpenter skills,” Rev. King said. Each man has seven decades of life experience.
“Why sit at the house, right?” Jim asked. “I’m an engineer, so I can tackle most anything.” (He prevailed over wasps infesting a building in Ada.)
Jim’s children participated in Youth Force “many years ago” in Lawton. When he retired, mission work was high on his to-do list. He’s reconnected with Youth Force and also leads Duncan-First Church’s Volunteers in Mission.
During YF-Ada, he guided extensive Kaney Chapel renovations.
“It was a worthwhile project; we had three teams there.” Youth Force registration fees help pay for needed materials, “so it didn’t cost anything for our service.” Kaney Chapel is an Oklahoma Indian Missionary Conference congregation.
Earl retired 11 years ago as an office manager.
“God has led me in a direction about 180 degrees from what I did. Now I lay hands on stuff, build and repair, things like Youth Force. It’s just wonderful,” he said.
But he’s also been farming since boyhood — “anything we ever did, we had to do ourselves.”
Several years ago, he said yes when asked to assist in YF-Duncan.
“I watched the kids grow during that week and learn some skills. It just made my heart soar, and I was hooked after that.”
Earl said he always gains more than he gives to Youth Force. “When we finish, most of the time the homeowner weeps with us. That’s one of the things I mean. The homeowners are not financially or physically able. The kids are awesome. There’s day-and-night difference, and that’s how it should be.”
Besides daddy, he especially treasures being called a tech angel. 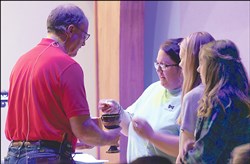 David described his Youth Force roles as facilitating and quality control. He said he gets materials for the God squads and then gets out of their way.
“Some kids you think would never step forward become the leaders,” he said. “Nobody knows each other, really, the first day. It’s interesting to watch them develop into real teams and working units.”
As for quality control, “it just takes somebody to say, ‘Oh, we are not quite right yet’; to show them how, get out of the way, and let them do it and fix it,” David said.
Midweek, he gets nervous seeing unfinished projects at multiple homes. “I’m saying, ‘Kids, you’ve got a lot of work to do yet.’
“It’s always surprising how the houses end up getting done. God’s back there, making all the right moves.”
The three tech angels also ha 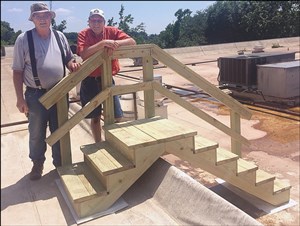 ve embraced First Church’s moniker for them: “the geezers.”
“We’re on speed-dial for the most part,” David said about smaller repair and building tasks they do for the Duncan church.
“I consider that a term of endearment now,” said Earl.
Senior Pastor Janice Sharp said the geezers have “true servant hearts” as well as incredible patience and great skills they’re willing to share. “I know I’m better because I know these three guys.”
In Ada, Youth Director Tara Cook of Duncan-First saw the mutual admiration and respect between the young people and the men far senior to them. That “brought tears to my eyes.” YF-Ada was her first experience with the program; participant total was 127.
Jim, Earl, and David never claimed “look what I did,” said Cook. Rather, “look what the kids did.”
Without the adults Youth Force could not spread out across communities, King affirmed. The work is not easy or comfortable for the volunteers, whatever their ages.
He knows. King was an eighth-grader at Lawton-First UMC when he first participated. Now he’s an associate pastor at OKC-St. Luke’s. And alongside Lori Foster in the Conference’s Office of Mission, he directs Youth Force Oklahoma.
“I don’t know of a better program for youth, a significant program, that combines the great elements of a mission trip and youth camp,” he said.