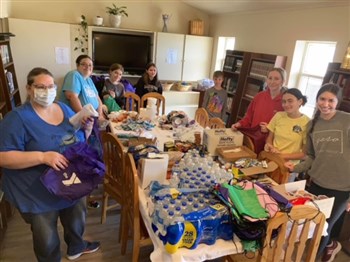 Emergency food and water are sorted into backpacks for the Lazarus Community. Photo submitted by Alanna Ireland.

A church in Northwest Oklahoma City is finding new life with Christians wanting to live out their faith in their daily lives alongside those recovering from homelessness. The Lazarus Community at OKC-Clark was inspired by the story of Lazarus being brought back to life in John 11 and intends to breathe new life into churches, Christians, and people outside of the church through its unique, social justice-focused model of evangelism.

Pastor Bo Ireland first came face to face with Oklahoma City’s unhoused population after suffering a series of seizures while attending seminary at Saint Paul School of Theology on the campus of Oklahoma City University. Losing his driver’s license until he could remain free of any additional seizures for 6 months, he began riding the public bus from Norman to Oklahoma City several days per week to attend seminary classes. Often, he would strike up conversations with those on the bus, many of whom were experiencing homelessness. On several occasions, he would arrive on campus only to discover the university had shuttered its doors due to anticipated inclement weather. “Unfortunately,” says Ireland, “the return bus to Norman only runs once per day, so I would be stuck in the city with no place to go.” Ireland began walking Northwest 23rd St. looking for a warm place to spend several hours until he could return home. Often, he would stop to buy necessities at a local convenience story only to be turned away because backpacks were not allowed inside the store.

“They did not care that my backpack contained hundreds of dollars’ worth of seminary books and computer equipment. Backpacks were not allowed in – period,” says Ireland.

Friendly neighbors used to walking the streets looking for warmth and necessities began to show Ireland the ropes, including safe places to stash his backpack where others would watch it for him while he went inside the store to purchase things he needed. Not only was his backpack kept safe, but he began to hear the stories of those living on the streets of Oklahoma City and how they formed community. Later, an appointment to Skyline Urban Ministry helped him to learn more about homelessness and the systems of care in place to help them survive or even get back on their feet.

“That’s when I began to see that, although the housing first model is the best we have, our neighbors experiencing homelessness are plucked up out of the streets and given a housing voucher that will meet their immediate need for shelter, but it also takes them out of the only community they know and often to an unfamiliar part of town where they don’t have any social connections. Often, they don’t have any furniture or transportation and only have a few months to secure all of the things necessary to maintain their housing—such as mental health assistance, and ID or documents, a job or disability qualification, drug and alcohol treatment, and those kinds of things,” says Ireland, “It’s often a lot of pressure for someone who is already struggling.”

Inspired by the work of new monastic communities such as The Simple Way and Catholic Worker Houses such as Cherith Brook in Kansas City, he began to dream of a community composed of Christians who are mature in their faith and wish to serve a neighborhood in their city, living alongside people coming out of homelessness in a supportive, holistic community. One day, while driving past a United Methodist Church that had recently shuttered its doors, he began to wonder if such a community could bring dying churches back to life, especially in neighborhoods experiencing high amounts of poverty, housing insecurity, food insecurity, lack of access to mental and physical healthcare, and homelessness. Many of our churches located in such areas are the ones experiencing a decline in membership as people move to the suburbs. After talking about his idea with his father, who suggested calling it the Lazarus Community, Ireland’s vision began to take shape and have a name. 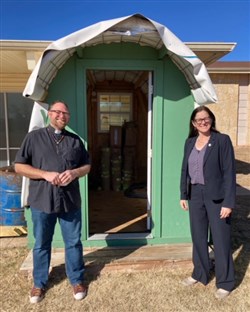 Rev. Bo Ireland (left) stands with state Senator Julia Kirt outside one of the shelters that will be built on the OKC-Clark Memorial grounds for the Lazarus Community. Photo submitted by Alanna Ireland.

When Ireland was invited to participate in The Academy for Innovative Ministry (AIM), he pitched the idea of converting a large church building whose congregation could no longer meet their expenses into living quarters for a core group of “New Monastics” who would serve as a community of hospitality to those recovering from homelessness. New Monastics, unlike the old monks, friars, or nuns many of us may picture, are a modern-day interpretation of Christian monastic living. New Monasticism reflects a commitment to a shared life, daily prayer and spiritual practice, the sharing of resources within and outside of the community, and the practice radical hospitality. Members of new monastic communities can be singles or committed married couples and can vary in their theology while sharing daily spiritual practices that unify the community.

After being awarded a small grant from AIM, Ireland pitched his idea to the Oklahoma United Methodist Conference and was met with a positive response. He was able to secure additional grant monies to get the Lazarus Community off the ground. After that, all they needed was a church willing to house such a community. Heartland District Superintendent Rev. Victor McCullough, knew of such a church – OKC-Clark Memorial at 23rd St. and McArthur Blvd. in Oklahoma City. In the spring of 2021, the church voted to enter into an agreement with the Lazarus Community.

One year later, the city of Oklahoma City has approved the rezoning of OKC- Clark Memorial to be both commercial and residential. The back half of the church has been converted into 6 living quarters to house a community of New Monastics who will live on ground. Ireland and his wife, Alanna, became the first residents in early 2022, followed by another young man. Each resident pays a monetary contribution to the community and volunteers at least 10 hours per week toward the community’s ministries in addition to committing to a daily “rule of life” emphasizing spiritual practice and hospitality. The front half of the church now houses the community’s ministries, which include a drop-in center providing showers, food, necessities for living on the street, pastoral care, referrals, and hospitality to mostly unhoused individuals in the neighborhood. However, Ireland says that anyone in need of company or assistance is welcome during the center’s drop-in hours Monday-Thursday from 10:00 AM-2:00 PM. The community also partners with Skyline Urban Ministry to host their mobile food pantry once per month and hosts a monthly food choice pantry in partnership with the Oklahoma Regional Food Bank. 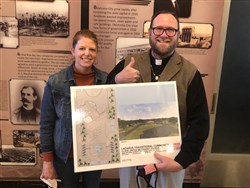 Alanna and Rev. Bo Ireland celebrate OKC-Clark Memorial being rezoned to include residential zoning for the Lazarus Community. Photo submitted by Alanna Ireland.

Work continues to bring new life to Clark United Methodist as three acres behind the church are converted into a tiny home community to house up to 20 individuals recovering from homelessness who will receive mental and medical health care on ground as well as share meals, daily life, and spiritual practice with the Lazarus Community. The community is currently also putting in a locker room, shower trailer, laundry facility, and other renovations to accommodate the daily needs of a community of up to 30 people. Details are being ironed out with a local agency to host both mental and medical health clinics on ground for the community and surrounding neighborhood.

Ireland says that he is excited to see how much has happened in such a short period of time and gives God all of the credit for how far the community has come.

“God keeps sending us the right people at the right time,” Ireland said. “We have had supporters through the Oklahoma Conference, other United Methodist churches, volunteers, community partners, our board members, and so many others who have made this vision a reality.”

He also says that he hopes in the future, the Lazarus Community model can be carried out in other churches and other neighborhoods. In the meantime, people wanting to learn more can visit lazaruscommunity.org or follow the ministry on Facebook and Instagram. The ministry’s needs at the moment include one-time and ongoing tax-deductible donations to their 501c3 organization, volunteers for their community garden, handyman and handywoman volunteers for light construction work on Wednesdays, volunteers for the weekly drop-in center, and donations from their Lazarus Community OKC Amazon wish list.

Their greatest need is Christians wishing to engage in a deeper level of community who feel called to live on ground and share their daily life with other people of faith alongside those who may have lost their faith through extreme life circumstances. Much like the story of Lazarus being brought back to life, the hopes of those who have lost so much can be brought back to life in a loving community similar to that found in the second chapter of Acts and throughout the history of the Church. For those wanting to inquire about becoming a residential member of the Lazarus Community, they can contact Ireland through Lazarus Community’s social media or by emailing bo.ireland1234@gmail.com.