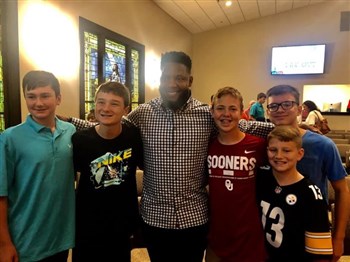 Former NFL player Curtis Lofton (center) poses with youth in the sanctuary at Kingfisher-First’s new location. Lofton, who is originally from Kingfisher, was invited to speak the week after the grand opening as part of a ministry series on faith and football.
By Rev. Pat McPherson

On Sept. 8, Kingfisher-First took the next step into the future.

After over 100 years in their historic location at the corner of Highway 81 and Highway 33, the congregation moved into their new facilities located just south of the Kingfisher high school.

It was a day of celebration. The Grand Opening was attended by more than 200 people from both the community and the annual conference. Members of the congregation spent much of the morning before the service giving tours to groups, and more than 100 people who were unable to make it to the worship service attended an open house that afternoon. Kingfisher-First also hosted the Crossroads District’s Charge Conference on Sept. 22.

Elements of the former building, such as the organ pipes in the sanctuary and stained glass in the entryway, were made a part of the new building as a way to honor the church’s history. Other elements, like Dr. Bob Palmer’s extensive mural work in the children’s area, are unique to the new location.