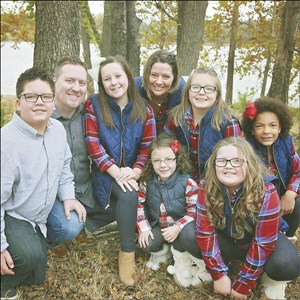 Keith and Staci Howard pose with their six children. Effective April 1, Keith becomes the new president and CEO of the Oklahoma United Methodist Circle of Care organization that assists children, youth, and families.
Following an extensive search, Circle of Care has named Keith Howard of Tulsa as new president and CEO, effective April 2. He will succeed Don Batson, who is retiring.
Howard has worked in the field of children and family services since 2004. He has served as Circle of Care’s vice president of programs for the past two years.
He is passionate about engaging churches and the community to make a lasting impact for kids. He and his wife, Staci, have six children, four of whom are siblings adopted out of the foster care system in Texas.
Just last year, Oklahoma United Methodist Circle of Care celebrated its 100th anniversary of serving children and families in crisis. The agency launched a bold plan as it moves into its next century, seeking to further expand its services and meet the enormous need for placement options for Oklahoma siblings in foster care. The Legacy of Care Capital Campaign is at the core of that effort.
That campaign already has raised over $2.5 million, and construction of the plan’s first foster home began last month in Alva.
As the agency’s executive leadership transitions, Batson will continue to supervise and direct the Capital Campaign project.
He has faithfully and adeptly led Circle of Care for over 12 years. He acknowledged, “I expected to retire at 66, which is only a little over one year from now. However, the culmination of the capital campaign’s rapid success, and a deep desire on the part of my wife and I to be part of our children and grandchildren’s lives in Tennessee, has accelerated that plan.”
Circle of Care’s programs include statewide Child SHARE foster care services, Pearl’s Hope Transitional Living program in Tulsa for single mothers and their children, and the Preparation for Adult Living program in Tahlequah and Gore for youth and young adults ages 16-24.
As he prepared for his new role, Howard asserted, “I’m honored to have been selected to lead the agency as we continue building on Circle of Care’s rich 100-year legacy and setting the groundwork for our next 100 years.”
Return to Contact Digest
Making Disciples of Jesus Christ for the Transformation of the World