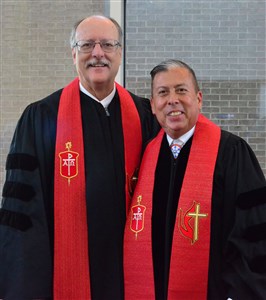 The South Central Jurisdictional 2022 Conference met November 2-5 in Houston, TX. to elect three new bishops, to deal with the conference budget and resolutions, and to hear reports from conference-supported missions and ministries.

In The United Methodist Church, bishops are ordained elders who are called to “lead and oversee the spiritual and temporal affairs of The United Methodist Church.” Bishops, in consultation with district superintendents, are responsible for appointing clergy. They also preside at annual conferences, jurisdictional conferences and General Conference, the denomination’s top lawmaking assembly.

There were seven candidates for bishop at this year’s South Central Jurisdictional Conference (SCJC) who interviewed with the delegates from every SCJ conference on several occasions before SCJC. Then during the two days preceding the SCJC, the candidates met several times with all the delegations and also held a panel discussion the evening of Nov. 1. On Wednesday, the first night of SCJC and on the very first ballot, three candidates reached the threshold of 60% support (91 votes out of 151 delegates at this meeting).

All three of the jurisdiction’s bishops — the Rev. Delores “Dee” Williamston (141 votes. the Rev. Laura Merrill (99 votes), and the Rev. Dr. David Wilson (92 votes) — were elected on the first ballot. The delegates and audience at First United Methodist Church Westchase broke into an extended standing ovation when the vote totals were read.

To give context to the historic nature of the vote, during last SCJC in 2016, over 30 ballots were taken to elect three bishops. Several people called their Methodist historians and the closest anyone has yet discovered is two cases of two bishops being elected on the same ballot (in 1813 and 1832). In 1784, Francis Asbury was elected on first ballot. So far, Archives and History have not found another example of three bishops being elected on the first ballot.

“The election of three bishops on the first ballot was not only historic but also a Holy Spirit moment,” said Jennifer Long, clergy delegate. “To see this moment of unity happen, when so many saw the gifts of graces of those elected, was a healing balm.”

After the election of the bishops, the Committee on Episcopacy went to work on assigning bishops to their conferences and made the final announcement on Friday afternoon.

Bishop Nunn has been reassigned to the Oklahoma Area, which includes the Oklahoma and the Oklahoma Indian Missionary Conference, and will still be providing oversight to the Northwest Texas Annual Conference.

In a letter to the Oklahoma Conference, Bishop Nunn said, “Mary and I are delighted to be returning to these three conferences. We have fallen in love with the people of Oklahoma and the ministries of the annual conferences here. I will continue to work tirelessly on behalf of the United Methodist Church in this episcopal area and as a Bishop to the whole church.” He went on to say, “To the 408 chartered churches, five mission churches, two ecumenical ministries, six new church starts, six satellites, fifteen campus ministries and the thousands of lay members and clergy which comprise the Oklahoma Conference, I am glad to be your bishop. I am pleased that you are the United Methodist witness in this annual conference.” Bishop Nunn also praised the election of David Wilson, who has served as the assistant to the bishop for the Oklahoma Indian Missionary Conference since 2021, following 19 years as a conference superintendent.

“The return of Bishop Nunn to the Oklahoma and Oklahoma Indian Missionary conferences allows us to continue to build the conferences based on established strong missional focus, local church priorities, and a strong financial foundation. We are pleased that he and Mary will be our Episcopal family for the rest of this quadrennium.,” stated Joe Harris, co-chair of the Oklahoma delegation.

The theme of this year’s jurisdictional meeting was “Together in Christ, Rooted in Love.”

Wilson has served as the assistant to the bishop for the Oklahoma Indian Missionary Conference since 2021, following 19 years as a conference superintendent. He was lead coordinator for the North Oklahoma City Native American Ministry for eight years, following eight years as a pastor of a church in Norman. He served seven years as director of promotions/interpretations for the Oklahoma Indian Missionary Conference, after being pastor of a church in Tahlequah and campus minister for the Native American Campus Ministry program at Northeastern State University. He received an undergraduate degree in mass communications from Oklahoma City University, a master’s degree in divinity from Phillips Theological Seminary in Tulsa, and an honorary doctorate in humane letters from Bacone College in Muskogee.

Wilson said word spread fast about his election as the first Native American bishop of The United Methodist Church. “My phone is blowing up already,” he said. “I’m hearing from Native people around the country.”

Wilson was especially pleased to have been elected by South Central Jurisdictional Conference delegates on the same first ballot as Delores “Dee” Williamston, who becomes the jurisdiction’s first female African American bishop. “We made history,” Wilson said.

The Rev. Delores “Dee” Williamston, director of clergy excellence and assistant to the bishop of the Great Plains Conference, was elected on the first ballot.

Williamston has served as assistant to the bishop and director of clergy excellence at the Great Plains Conference since 2021. Prior to that, she spent seven years as a district superintendent in the Great Plains.

She has a bachelor of science in management and Christian ethics from Manhattan Christian College; a master of divinity from Saint Paul School of Theology, with a specialization in evangelism and Black church studies; and is scheduled to receive a doctor of ministry degree in transformational leadership in improvisational ministry from Phillips Theological Seminary in May 2023.

Williamston is a 22-year veteran of the Kansas Army National Guard, rising to sergeant first class, and has also worked for the U.S. Property and Fiscal Office, State of Kansas food stamp department, American Federation for Television and Radio Artists, and a New York law firm.

Williamston noted the historic nature of her election. “God showed up through the South Central Jurisdiction to elect their first African American woman bishop,” she said. “It means a lot to stand here and represent and finally say we are here and we are not done.”

Williamston added: “A lot of people have sacrificed for me to be here in this moment. It means we are moving forward ever so slowly, but we are moving.”

She also promised she would not shrink from leadership challenges. “I’ve got gumption,” Williamston said. “Don’t forget I have gumption. I want people to know that.”

The Rev. Laura Merrill was elected as bishop on the first ballot She has been Central District superintendent for the Rio Texas Conference since 2021, and on the conference cabinet since 2010.

She received a bachelor’s degree in international studies from Southwestern University in 1984, and a master’s in divinity from Candler in 1995. A third-generation United Methodist pastor, she has two children.

Merrill noted that her election came on the same first ballot as those of Williamston and Wilson.

“To be a part of that (history) is just joy,” Merrill said. She said she was looking to God for help in her new task, and then she listed specifics.

Delegates from both laity and clergy voted to pass three resolutions that affect the Oklahoma conference. Each resolution directly impacts the changes brought to the conference by disaffiliation of some individual churches from the conference.

The three issues at hand are Leading With Integrity, Resolution in Support of a US Regional Conference, and Queer Delegates’ Call to Center Justice and Empowerment for LGBTQIA+ People in the UMC.

According to the Legal Information Institute, a resolution in the context of legislative practice is “a form in which a legislative body expresses an opinion or a purpose with respect to a given matter or topic that is temporary in nature. It denotes the adoption of a motion, the subject matter of which does not constitute a statute.”

The resolutions are the outcome of a vote by delegates to the South Central Jurisdictional Conference, and they express the intention and the direction of the conference as a unified body.

Though the votes are not codified into law, they do express the intention of the conference, and in doing so, allow churches to begin the process of preparing for coming changes. 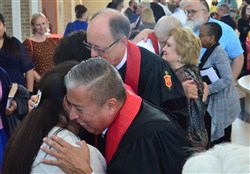 Bishops Wilson and Nunn celebrate with a blessing from the OIMC. Photo by Tabitha Beckman.

Clergy, lay leaders, board members, and others who are in leadership have a conflict of interest if they have a real or expressed intention to leave the UMC. In order to deal with that conflict of interest, the resolution states that disaffiliating members should recuse themselves from leadership positions. Further, it implores boards to create codes of conduct to manage any conflicts of interest born from disaffiliation.

“In some ways, this resolution was already demonstrated by the vote of the delegates and the atmosphere of the conference,” commented Bishop Jimmy Nunn.

The purpose of this resolution is to allow regions to design their ministries for their own specific contexts, since the United Methodist Church is a multicultural, multinational organization comprised of 136 countries and countless cultures. Allowing each region to make changes to certain aspects of its local legislation will aid in the continuation of a strong and diverse United Methodist Church.

“This idea was first introduced in 2008 in Fort Worth and has matured over time,” said Nunn. “The resolution as adopted by the jurisdictional conference says it’s an idea whose time has come to reconsider. Of course, it takes General Conference action.”

“Though aspirational in nature, this resolution affirmed the idea that there needs to be more inclusion for LGBTQIA+ people in the United Methodist Church,” said Nunn. “It would address the current provisions in the Discipline, and the writers of the resolution hope to have it codified at General Conference.”