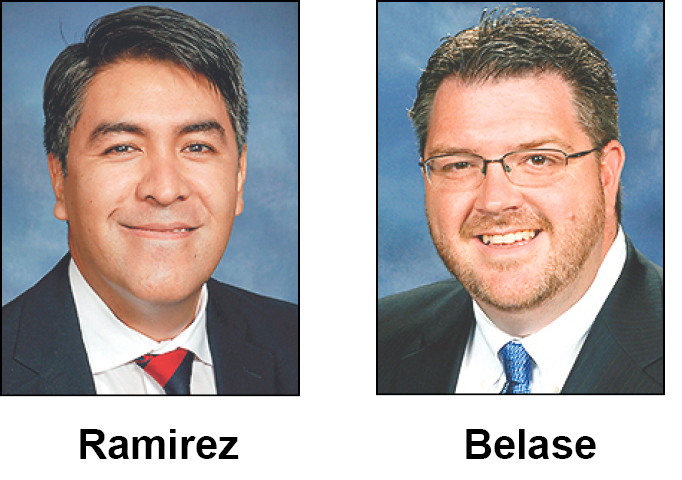 Carlos Ramirez uses a ball chair and sit/stand table in his streamlined office, befitting his work focus: innovation and leadership development at all levels within the Oklahoma Conference.

He clicks another symbol, and Census demographics pop up.

The interactive map he’s created is helping leaders assess how God is calling them forward in ministry.

"Seeing the maps provide lots of answers," said Rev. Ramirez. "You get excited about your area of ministry."

Rev. Ramirez saw just such enthusiasm when he met recently with 30 people at an Oklahoma City church. They had asked him: Can you help us to see where we’re going?

The map also can be configured for an entire city, a Missional Area, a district, or larger area.

"The balcony view" is vital for the new job of associate director of Leadership Development and Innovation. His office is at the United Methodist Ministry Center in Oklahoma City.

"This is important. We should not just do low-risk ministries. If you truly care, you are going to change to do things to reach the community."

Among his duties, Ramirez is the Conference staff liaison to the Leadership Development Ministry Team (LDMT). They are diving into big questions.

Why should churches engage with their communities?

What leaders does the Church need? How to raise them up?

The LDMT recently elected officers for the quadrennium and organized into three subgroups. Audra Fogle and Adam Shahan co-chair; secretary is Charles Neff.

• One subgroup will assess "the brutal facts" about leadership needs in the Church, said Ramirez.

• Resourcing to empower and train leaders is the task for another.

"We are looking inward and outward. It will be a very robust approach," Ramirez said.

Ramirez said God has prepared him with holy boldness for this new appointment. He has two master’s degrees. He reads extensively. His life experiences have instilled strength and resilience.

A native of Mexico, the young adult pastored rural churches in far eastern and far western Oklahoma before his appointment in 2012 to the Office of Mission staff. His wife, Wendi Neal, is pastor of OKC-Mayfair Heights, and they have two children.

Craig Stinson, the Conference’s director of Connectional Ministries, oversees Annual Conference Council staff at the United Methodist Ministry Center. The LDMT is one programming branch of the Council.

"Leadership: I feel a lot of hope about it," he said.

Work by the LDMT and Ramirez starts with the Conference’s Strategic Plan, said Rev. Stinson. Among the Plan’s goals are reaching younger, more diverse people; and recruiting, equipping, and deploying effective lay and clergy leadership.

"This all feels like alignment (with the Plan). It’s like when you’re in the dark and you’ve got a flashlight. You know the basic direction you’re supposed to head. You just step out, you go to where the light is, and then you go further. There probably are multiple paths, and that’s exciting."

He continued, "If we’re successful in … releasing and deploying the giftedness of this wonderfully more diverse group of young adults, who do want to make a difference in the world, I think the churches will be a much more powerful force in our neighborhoods and towns than they are now."

A series of podcasts is another creative way that Ramirez is expanding community in collaboration with LDMT.

Find "The Door Is Open" on Facebook, subscribe to the podcasts through iTunes, or go to www.TheDoorIsOpen.org. Interviews address five general topics: income, education, religious affiliation, automation, and demographic changes in the U.S. A new podcast is uploaded about every two weeks.

To explain his role as the Conference’s new director of Discipleship, Derrek Belase pointed to paragraph 122 in the denomination’s Book of Discipline. It lists the processes for carrying out the Church’s mission of making disciples. Among those: proclaim, lead, and nurture.

The words are short, but the work isn’t simple.

Belase started work Aug. 1, moving from pastoring two churches, Prague and Arlington, to being based at the United Methodist Ministry Center, Oklahoma City.

He soon was on the road with Chris Tiger, director of New Faith Communities, attending districts’ set-up meetings. He’s speaking and consulting in local churches; he preached at Stroud on Sept. 4. He has been helping revamp the charge conference form.

Every aspect of his new appointment starts with a question. What is a disciple?

He’s pursuing answers in collaboration with the Discipleship Ministry Team (DMT). He is the Conference’s staff liaison to the team, chaired by Terry Koehn. Cindy Havlik and Susan Whitley also are officers.

At a recent retreat, the team and new director agreed their vision is "Oklahoma United Methodists growing in the likeness and image of God by loving God and neighbor via the Wesleyan means of grace and sharing that with others."

And they agreed to read relevant books as a group. The first volume: "Transforming Community, The Wesleyan Way to Missional Congregations," by Henry Knight III and Douglas Powe Jr.

Belase said they want to offer churches resources and pathways for disciple formation — and hope.

"You are going to hear more about what good is happening in Oklahoma," he vowed. "Why talk about the declining ones? We know we’re in decline."

He noted, "106 of our churches have grown over five years."

He looks forward to reading "Feed me a story," a new section of the charge conference form. It’s found in the pastor’s profile.

Belase "gleaned creativity and life from walking alongside new-church pastors" during eight years on the board of Congregational Development/New Faith Communities. The greatest lesson for him was: You must make new disciples.

"No one church or social platform is going to" renew The United Methodist Church, he said.

"You must make disciples. Rinse and repeat."

Belase said his parents modeled making a difference. He grew up in Carnegie, where his dad was fire chief and young Derrek went out with him on calls.

Before entering career ministry, he worked in criminal justice. He and his wife, Rebekah, are graduates of Saint Paul School of Theology. She is an ordained deacon, working for Church World Service. They have two children.

He credits the Conference Strategic Plan and a consultation for helping Highland Park grow its ministry in a college town with more than one United Methodist church.

Highland Park formed connections with college students "who were from smaller expressions of church," he said. "That’s when I really recognized that a plan is important."