In Catoosa, all find seats at The Table 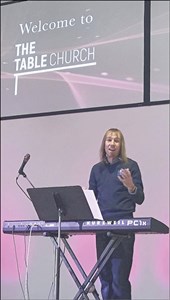 Pastor Andy Henson leads Feb. 11 at the launch of weekly worship at The Table UMC in Catoosa.
BY CHRIS SCHUTZ
CATOOSA, Okla. — Rectangles of brightly colored confetti burst from a cannon Feb. 11, in celebration of The Table, a resurrected United Methodist community in Catoosa.
The Table is a satellite of Owasso-First UMC.
The name emphasizes the church’s plan to serve Holy Communion weekly, Campus Pastor Andy Henson said. Worship format will range from modern to the Church’s “rich history and tradition of music and liturgy.”
The Table has chosen “to gather together at the Communion table each and every week. It’s something we’ve chosen to lift up,” said Rev. Henson, a full-time Local Pastor who is an associate on the staff of Owasso-First.
During the February launch service, Chris Tiger noticed “a good spirit in the church.” He is the Oklahoma Conference’s director of New Faith Communities.
Rev. Tiger said Henson’s sermon focused on Luke 5:1-11, in which Jesus tells Peter, a fisherman, that he will be a fisher of men. “Jesus will see more in you than you see in yourself,” Tiger said.
Chuck Horton, senior pastor at Owasso-First, said he is “very pleased and excited about what I’ve heard regarding the launch service.”
Henson said he didn’t know what attendance to expect for that first weekly service. Bitter winter weather had moved into the greater Tulsa area, which likely affected turnout. He said about 60 people came for worship.
With the launch of The Table in Catoosa, Owasso-First is “one church in two locations,” Rev. Horton said. The cities are about 20 miles apart. The overall task to consider is “how do we start being ‘us’ and ‘we’?” he wondered.
The Table needs to consider theoretical and practical ideas as it starts out, he said. “How you welcome people. How you make yourself hospitable.”
The new faith family needs to be “very missional into the community,” he said.
The Table plans to open its doors to the wider community, such as offering space for student plays.
The satellite in Catoosa started holding monthly preview services last year, which is “the usual way we begin these new faith communities,” Tiger said. In addition, Henson has worked with a coach to advise the church on early steps.
The Table is the newest faith community undergirded by apportionments from all the churches of the Oklahoma Conference. Henson is known widely, too, for his lay service co-chairing the Conference’s Young Adult Ministries prior to his clergy career. He completed Local Pastors Licensing School in 2016.

The start of a calendar year is a good time to launch a church, because of the buildup to Easter, Tiger said.
Before the launch, Henson said, he was “spending time out in the community, getting to know the community officials, building those relationships.” He wanted to “get a better sense of what’s happening in the community and introduce myself.”
Small teams of United Methodists also went out once a month and extended door-to-door invitations.
Catoosa’s population is 7,151, according to the 2010 U.S. Census.
“So many folks in the community don’t have a church home,” Henson said. “There are people who don’t have a place where they’re finding meaningful connections. They can be a part of this from the very beginning.”
In Catoosa, The Table meets in a modern church facility, built in 2002 by the former Disciple UMC. There has been a Methodist church in that city for 135 years. Disciple UMC experienced declines in attendance and, in 2016, the Conference’s New Faith Communities committee approved the satellite opportunity there for Owasso-First.
According to the 2017 Oklahoma Conference Journal, Disciple was officially closed on Dec. 31, 2016, and on Jan. 1, 2017, the property was assigned to the Owasso church.
Although the building is newer, the sanctuary interior was unfinished. Completing it was a key part of renovation work that began in 2017 and was completed this year, Henson said.