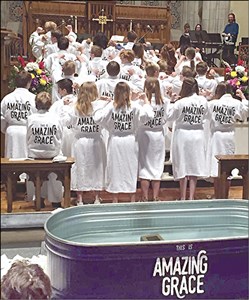 Special bathrobes commemorate the baptisms of some Confirmation students at Tulsa-First (2017).
BY KYLE WESTFALL

TULSA — For several years, the modern service at Tulsa-First United Methodist Church has celebrated immersion baptisms with a soundtrack anchored by Phil Wickham’s song “This is Amazing Grace.” As new believers are raised out of the water, the chorus is sung and the congregation erupts in joy.

Senior Pastor Jessica Moffatt, in an effort to emphasize this milestone of faith for children and youth, introduced the baptism tank and song to the Gothic cathedral services as part of the Confirmation ritual.

On April 8, Confirmation students who had never been baptized had the opportunity to do so by immersion, rising out of the water and into celebration. Each student was then wrapped in a bathrobe imprinted on back with the words “This is Amazing Grace.”

After the baptisms and Confirmation ritual were completed one year, Rev. Moffatt invited those in the congregation to remember their baptisms by touching the water in the tank.

As the audience moved through the sanctuary, a man stepped forward. He wanted to profess his faith for the first time and be baptized.

Encouraged by the sight of so many young people making personal commitments that day to faith and to the church, that man also proclaimed Jesus and was baptized — wearing his three-piece suit!

The First Church party extended to embrace him, too. Many gathered around him as he, too, was raised out of the water, into new life. God’s grace truly is amazing.