Twelve babies were born into the Lost Creek Church family between Christmases 2014 and 2015.

So the rural United Methodist church south of Stillwater made merry in multiples for Jesus’ birthday in December.

• The choir sang "The 12 Babies of Christmas" (customizing the carol) as slides showed the babies posed in red stockings for Sweets & Treats, the church’s Christmas variety program.

• The moms and babies took turns as Mary and Jesus in the children’s Christmas program on Dec. 20.

• An heirloom ornament for each child was added to the sanctuary Christmas tree.

• A lively holiday photo session with all the infants yielded a memorable group picture.

The impact of "a bumper crop" of babies "has changed our ministry," said Local Pastor Max Rudd recently. It goes well beyond adding rocking chairs in the sanctuary.

Lost Creek UMC is almost 108 years old, but most of its people have attended only 10 to 15 years, Rev. Rudd said.

They are from many faith streams, including Moravian, as well as no faith history. Lost Creek is the first United Methodist experience for "the vast majority" of newer members, the pastor said.

Yet people tell Rudd it’s "like coming home" to become part of this church family, he said.

"There’s this dynamic of a new church held within this church with a rich history. We have the best of both worlds," Rudd said.

"We do things because they have meaning and purpose here with the group of people we have here. It’s not the same for each church."

This church offers Holy Communion every week. Sunday School is the preferred small-group format, and both Sunday morning worship services are traditional.

Statistics show between 17 and 20 percent of Sunday worshippers are third-graders or younger. Lost Creek welcomed four more members on Jan. 10, and already two babies are expected in 2016.

For a $3 donation, the girl colored an angel picture; all the money and pictures were sent for a children’s party in the village.

More than $900 was collected! Rudd said half the amount provided a grand outdoor Christmas party for 100-plus children as well as boxes of food for 40 families. The other half will fund an Easter party for them.

"That’s what we talk about when we talk about the culture of this church: a 6-year-old can vision this and bring it to fruit," Rudd said. "That plays out in multiple roles all the time" at Lost Creek.

Such vibrant lay ministry grows both informally and through training opportunities. Officers serve in three-year cycles.

Every other year, Rudd teaches a leadership class. "We develop a common vocabulary," he said. Topics include:

• how a committee functions;

• appropriate conversation and behavior for a committee meeting; and

The book "Five Practices of Fruitful Congregations," by Bishop Robert Schnase, "resonated" with the people when the congregation studied it, the pastor noted.

Rudd has pastored at Lost Creek for 40 years, but his was a bivocational ministry until 2011. (He also was a school psychologist for 35 years.) Lost Creek needed all its people to share in the work because of Rudd’s dual duties in that era — and they continue in that commitment.

"You don’t just go somewhere and stay 40 years; I see four or five distinct congregations that I’ve pastored in that time," Rudd said. "I see how I’ve had to change. And veteran leaders are always looking for their replacements."

"Local churches provide the most significant arena through which disciple-making occurs," states the United Methodist Book of Discipline.

MOPS (Mothers of Preschoolers) programming kicked off in September — more proof of the impact by the diapered dozen on this church’s ministry. Lost Creek’s United Methodist Women give enthusiastic support, including funding, and Rudd prepares supper for the moms "because I want to."

About 60 percent of the women who attend are from the community beyond the church, the pastor said. "I’ve been floored by what an outreach it is. The friendships that are forged there! Any church might consider it," he suggested. 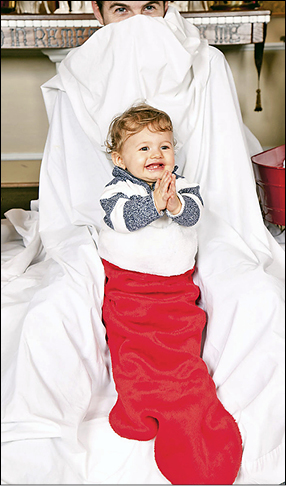 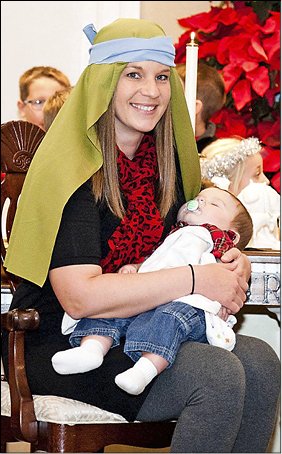 Becky Reedy and Camden take their turn as Mary and Jesus in the Lost Creek children’s Christmas pageant on Dec. 20. 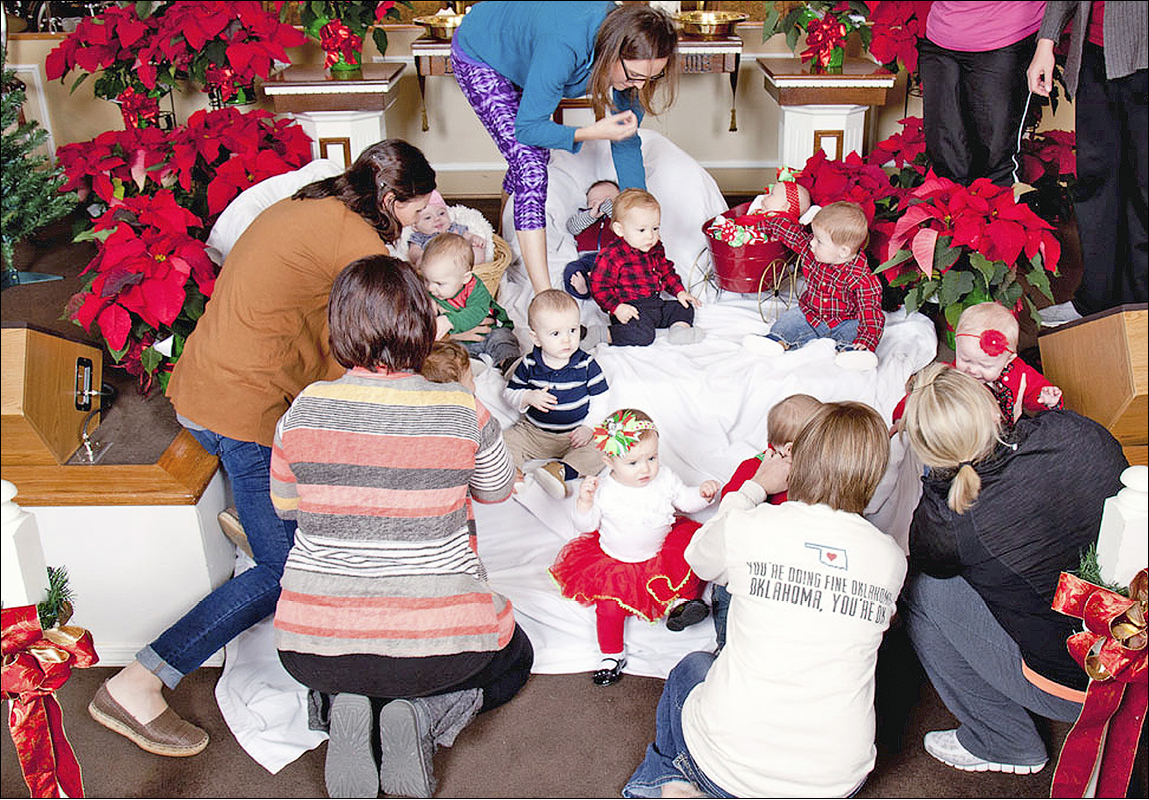 How many babies can you see? Moms and volunteers scramble to stage a photo at the church on Dec. 6 featuring the 12 children born during the year to Lost Creek’s families. One child is hidden by the busy woman at left. 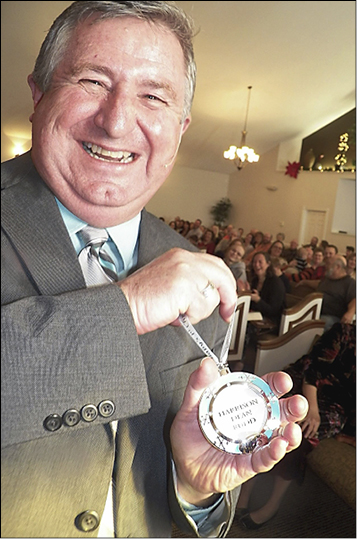 Pastor Max Rudd prepares to hang an ornament in honor of his new grandson, Harrison, on Lost Creek’s sanctuary Christmas tree.
Above photos by David Holbrook

The country church south of Stillwater is more than a century old. The church has been enlarged three times. The original building sits in right foreground. Photo by Holly McCray