A licensed Local Pastor since 2012, Rev. Hiller retired as a professional engineer in 2013, after almost 30 years with the Oklahoma Department of Transportation.

The Hiller family — Jeff, Sharri, and children John and Monica — have been enthusiastic participants in church camping for years, especially at Cross Point. Their home church is Ringling UMC.

Rev. Hiller attended the Cross Point Community Walk to Emmaus in 2002 and has been assistant spiritual director on three Walks. He is serving a second term on the Board of Directors for that group.

Since 2009, he’s served as dean of Tweens camp at Cross Point; he’s volunteered in leadership for numerous other camps, too, at this United Methodist facility beside Lake Texoma. He also chaired the Cross Point Site Development Committee.

He earned a B.S. in civil engineering at the University of Missouri-Rolla and is pursuing Course of Study with Saint Paul School of Theology. 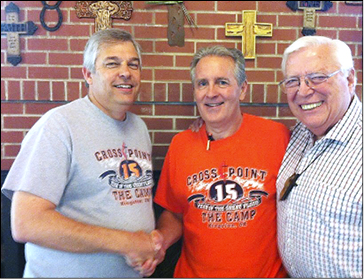 From left: New Cross Point Camp manager Jeff Hiller is welcomed April 12 by Ken Long, retiring after 20 years as the camp’s manager, and Bob Langston, vice chairperson of the Site Development Committee for the camp. Photo by Herschel Beard