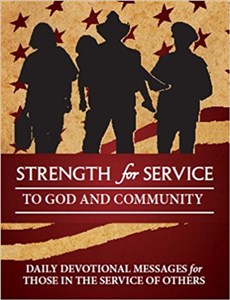 An overwhelming desire to bless local first responders has maximized the number of free copies available from the 2018 Oklahoma Annual Conference Special Offering.

The special offering helped pay for more than 3,000 copies of “Strength for Service to God and Community,” a daily devotion book for first responders. The books, which were marked with the logo of the Oklahoma Conference of the United Methodist Church, were offered to churches to give to police officers, fire fighters and other emergency service workers in their communities. All free copies of the book were claimed within six weeks.

In response to continued high demand, 3,500 copies of the devotion book are being offered to Oklahoma Conference churches for $5 each, which includes the cost of shipping and handling.

Director of Discipleship Derrek Belase said church response to the book as an outreach tool has been overwhelmingly positive.

“There is this renewed interest in churches recognizing they have to get outside the walls,” he said. “Any chance they get, our conference churches have jumped at it.”

Belase says one of the best ways to share the devotion books is to have a special service for first responders. He suggested hosting a 9-11 Rememberance service as a natural opportunity to serve local police, fire fighters and emergency service workers.

“To be asked to come and not have to serve can be such a blessing,” said Belase. “Too often, when people call first responders, they want service. Rarely are they called and someone says ‘we want to serve you.’”