Kristen Harlin of Sapulpa joined the Conference in April as executive director of CJAMM (Criminal Justice and Mercy Ministries).

A native of Little, Okla., she holds a bachelor’s degree in political science with a minor in sociology.

In college she did an internship at the Pottawatomie County juvenile detention center and became interested in the field of corrections.

Harlin found her niche in corrections and law enforcement with a main focus in Juvenile Justice for 8 years. This led her to becoming the Administrator of Juvenile Justice facilities in Pottawatomie and Creek Counties as well as serving on the Oklahoma Juvenile Detention Center Association Board to work with the State on incarceration matters. Harlin was also the first female captain for the Creek County Sheriff’s Office. Harlin started programs in Juvenile Justice Centers as well as retained vital resources to assist children in Oklahoma and their families.

She attends Sapulpa-First, where she is certified as an Advanced Lay Servant. Kristen and her husband, Kerry, live in Sapulpa with their two children, Samantha, 14, and Chandler, 5.

CJAMM seeks to break generational cycles of prison, addiction, and criminal behavior. The ministry nurtures healthy Christian relationships for inmates and their families. CJAMM also provides care for children of incarcerated parents and advocates for justice.

Kristen said that, as CJAMM’s new director, she hopes to "maintain what we have going."

The ministry also helps former inmates find employment and housing, reunifies families, and supports them with transportation and other needs. CJAMM volunteers serve in almost every prison in Oklahoma, ministry leaders reported.

Kristen said she’s heard former inmates testify that they got their faith through their involvement in United Methodist Redemption Churches in Oklahoma City and Tulsa.

"They are very on fire for God," the new director said. A female former inmate told her an emotional story that through church involvement she has learned "to keep on the straight and narrow."

For more information, go to www.cjamm.org 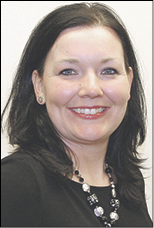