First UMC builds prayer park for all people in Frederick

Frederick-First UMC wants its new prayer park to be a place of peace for all.

The space includes a paving-stone labyrinth and benches designed to match others the city has placed around town. A pergola and a cross stand tall. There’s inviting green in the landscape.

The park’s beside a children’s play area, also built by the church. Adults can rest, reflect — and keep watch while young ones get out their wiggles.

The Judy Benson Worship Area completes three phases of construction on First Church’s property. And it honors a church member well known for her enthusiastic and extensive involvement in Frederick, in far southwestern Oklahoma, and at all levels of The United Methodist Church.

Pastor Chris Dodson described Benson as "a pretty amazing part of God’s creation." The prayer park is "a great tribute to who she is as a Christian and as a Frederick citizen."

Right after the recent dedication, a social media post signaled the wider interest: "Thank you and your church family for sharing your prayer garden with the community!"

Loyd Benson said his wife became especially active in leadership beyond their local church about 25 years ago. A plaque in the park lists three major roles she has served in the Church since then: president of the Oklahoma Conference United Methodist Women, Conference lay leader, and South Central Jurisdiction lay leader.

Representing all lay people, Judy Benson served alongside Bishop Robert Hayes Jr. in much of the work. He in turn welcomed the invitation to lead the dedication of the park on June 26, he said.

Worship that day began inside First UMC, then moved outdoors to the park. Rev. Dodson explained, "Worship isn’t just something you do in the church; we went out."

"It’s a worship area for the whole community. Groups can meet there," said Loyd Benson. "You don’t have to be Methodist."

After Bishop Hayes’ message outdoors, along with music and prayer, the congregation returned indoors for a fundraising meal in the Family Life Center that supported a youth mission trip to Shiprock, N.M.

"It wasn’t just about what we’ve accomplished. The church always has something else God calls us to be up to," Dodson said.

The construction project began when the church acquired an adjacent lot with an old house condemned by the city. A two-year funding campaign followed. Overall project cost was about $80,000, Dodson said.

A garage for the church van and trailer was built first.

Lots of volunteers labored on the project’s second goal: the children’s playground. "Probably 30 people worked the day it was put together," said Loyd Benson.

In the Worship Area, donor names are stamped in a brick pathway to the labyrinth. 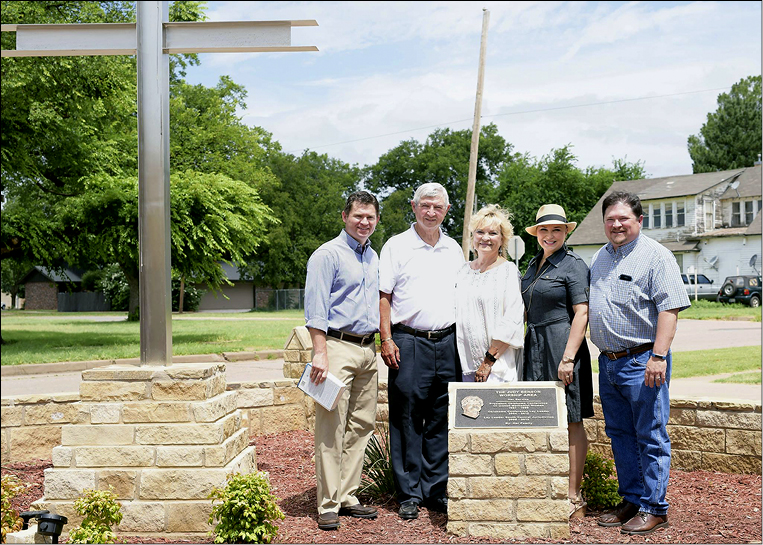 Loyd and Judy Benson stand in the new worship area with their children, Brent Benson, Dawn Mefford, and Brad Benson. 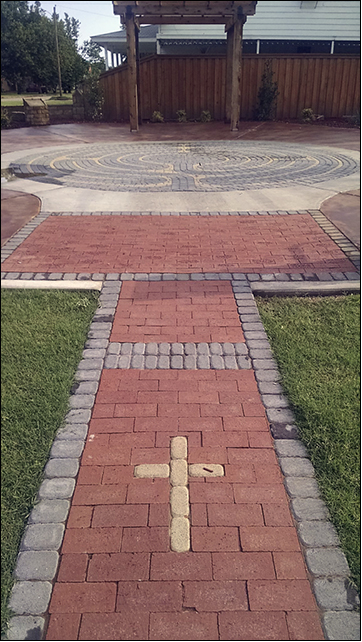 In the Judy Benson Worship Area, a path leads to a prayer labyrinth and pergola on Frederick-First UMC property.