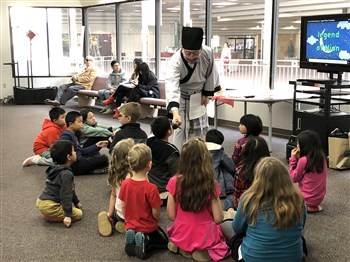 The storytime station taught attendees how the traditional Chinese Legend of Nian ties in with the story of Passover in Exodus. Photo by Tabitha Beckman.
By Tabitha Beckman

On Feb. 17, Charis Alive hosted a Lunar New Year celebration at OKC-Church of the Servant.

“We put this celebration together because this is one event that will draw a lot of the Asians into the church as Lunar New Year is one of the most important festivals in the Asian countries,” Rev. Victoria Lee said.

The come and go program had five stations, such as photos in traditional garb, learning to make dumplings, participating in caligraphy demonstrations, and assembling lanters.

A storytime station explained the tradition of Lunar New Year, the legend of Nian, and how it all ties in with the Passover story in Exodus 12. Lee said making connections between the two stories helps showcase the Bible and tie it in to Chinese culture.

“In the Chinese culture we start out the Lunar New Year with cleansing of the house; it’s exactly the same as Exodus when they had to get rid of all the leven in the house,” Lee explained. “Every family likes to celebrate the new year by decorating their front door with the red cuplas, which can symbolize the blood of the lamb that they put over the doorframe so the angel of death would pass over their house.”

Charis Alive plans to put on other events that combine cultural interests with scriptural tie-ins as part of its continuing outreach to international and bicultural Asian communities.