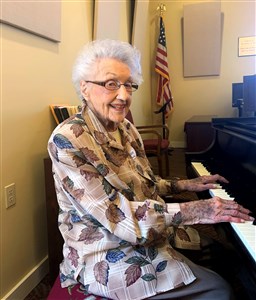 Betty Harding, a resident of Epworth Villa, plays the piano in Epworth Villa’s Brill Chapel. Harding, who turned 100 years old on Dec. 11, is a lifelong pianist and long-time member of the United Methodist Church. Recently, Harding played a piano duet with Wes Howl, who plays the organ at Epworth Villa. Their duet was featured as part of the Epworth Villa choir performance shared during the 2020 Annual Conference. The video can be found on the Oklahoma Conference’s YouTube channel. Photo submitted by Beth Case.

By Beth Case and Wes Howl

If you were to ask anyone at Epworth Villa to name an amazing centenarian, they would unanimously answer, “Betty Harding.”

Harding was born at the Chilocco Indian School in Oklahoma where her parents were on faculty. Her second husband of 1/4 Cherokee heritage was a student at Chilocco. He would listen to her playing the piano and was smitten. Although students could not fraternize with the faculty families, years later, a set of circumstances would lead to a reunion and marriage.

Harding moved to Apache, earned a degree in piano at the Oklahoma College for Women, and pursued additional study out of state. She and her first husband owned a Ford dealership in Apache. In addition to helping with management of the dealership, Harding was the organist at the Methodist Church for 35 years and taught private piano lessons. She remained in Apache until her first husband passed away.

In 1983, she married Mike Harding, who had listened to her piano playing at the Chilocco school nearly 50 years before. During that time, he became a baker, served in World War II, and became the president of Krispy Kreme donuts.

For many years, Betty and Mike Harding enjoyed travel, golf, and family. They eventually moved to Epworth Villa in September 1991. Since that time, she has been one of the most active accompanists for worship and social events in the Epworth Villa community. And to this day, Betty Harding is still playing the piano for worship services in Epworth Villa’s Brill Chapel. Organist Wes Howl likened her devotion to preparation and study of musical score to that of a teenager in a conservatory.

“I have collaborated with many musicians through the years, but I have found Betty to be the most sensitive, musical partner of any I have known,” Howl said. “Playing with her is a delight usually found only in higher level chamber musicians. She has never sought the spotlight but appreciates the opportunities afforded at Epworth to share her gifts and contribute to her chosen community.”

On Betty becoming a centenarian, Epworth Villa’s CEO, Ron Kelly said, “God has given us a gift in Betty Harding. By being a servant and sharing her gift with her community, she has found a way to thrive. Today we celebrate Betty and thank her for a lifetime of service to the church and others.”