The youth are the future of our church. The young people of Elk City United Methodist Church quash that stale phrase. They absolutely are the church now.

The youths raise the funds — a $10,000 commitment by them for each school year — and serve their peers in a tutoring program at Elk City’s schools. It’s called Elk Up for the seventh and eighth grades.

The church youth group established it, partnering with the school.

Elk Up offers after-school help by paid tutors to students who are failing one or more classes. This fall, the seventh- and eighth-grade tutors include two high school students, who are National Honor Society members, and three teachers.

"It’s really cool because I can help them understand stuff," Casebeer said in a video. "I feel like these kids can go in and test better, knowing they understand a problem, not having to freak out, (but) ‘Oh, I know how to do this.’ They’re not bad students. They just have trouble understanding.

"The best part about it is seeing other students understand."

Their grades prove they do.

Teacher Tim DeWitt said up to one-third of the middle-school students were failing one or more classes before Elk Up launched. "We’ve knocked that down" to about 7 percent, he said.

"At three grade levels last year, we saw a 74 percent reduction in the number of classes failed." The tutoring initiative began at the middle school and was expanded to the intermediate (ninth grade) and high schools.

Elk Up has changed the culture, DeWitt said. Teachers support it, and students are motivated.

For example, he said, students who are English Language Learners "just weren’t keeping up in class because they couldn’t understand the language." Now a bilingual National Honor Society student helps them after school four days a week.

The after-school work definitely is not detention.

"It’s an opportunity," DeWitt said, "not just one hour and done, not just about doing the homework. We really care about them."

Whitney Kleinpeter tutored last year, her senior year. "I think I can break it down, make it fun, act silly if they’re tired — like stand up and do a silly stretch — and it kind of refreshes them. They have a way better attitude," she said on video.

"These are the kids who are afraid to ask questions, have trouble paying attention, feel kind of intimidated overall. I think they’ve made more friends; they’re more open. They actually want to listen, want to try, break it down, and take it step by step."

A school band director, DeWitt admitted he was "so frustrated" in the past when he saw the long list of students ineligible to perform because of low grades.

He also is the junior-high youth ministry coordinator for Elk City UMC. Senior Pastor Terry Koehn credits him and the youth members with the vision for Elk Up.

"God has really blessed our youth group with funding, and our church has been very generous. We’re not here to collect money and sit on it," said Rev. Koehn.

This is Kingdom work, defined by Elk City UMC as "what makes Jesus smile," he said.

It’s also "internal discipleship," he noted. The youth members raise money but don’t spend it on themselves. It goes to the Elk Up program.

• About six times a year, they pack and load unsold clothing from the church thrift store when a "rags truck" arrives to collect the soft goods for other purposes. The company pays by the pound.

• The youth group holds a dessert auction each February that raises thousands of dollars, too.

The church wanted to connect with the school to help students in a meaningful way, and "the tutoring program was where we needed to be," DeWitt said.

Elk Up won’t solve every issue, he admitted, and other schools in the state operate similar programs. But its initial success in Elk City Public Schools was highlighted at a statewide teachers event called Gear Up.

On the video, Randy Brooks, also part of the school’s music staff, said, "The one word that comes to mind is hope. There were kids falling through the cracks before … Now this is an extra lifeline to help those kids get up to level and get on the task." 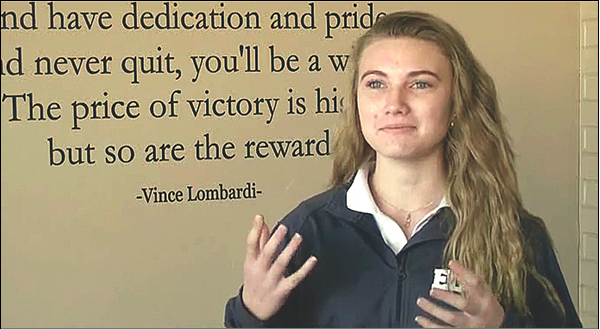 ‘The best part about it is seeing other students understand’