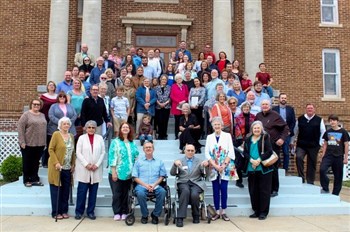 The event began with a catered lunch and rolling slideshow of church history photographs dating back to the 1890s. After and introduction and prayer by Rev. Allen Carson, Amy Neathery, who helped El Reno-Wesley obtain Historic Site Status, revealed four commissioned pieces of art which were created by local photographer Ed Zweiacher. All four pieces depict the church’s sanctuary, which held its first service on October 1, 1922. Neathery then read a letter from Leonard Jensen, detailing his memory of the church from the 1920s through 1980s. His earliest memory was from the age of five and witnessing the masons wearing their aprons and laying the cornerstone in 1921 on what was the “largest wall” he had ever seen. Neathery also explained the process for obtaining Historic Site status, noting it was a dream of former church member Carolyn Barker, who passed the project to Neathery and her husband Tommy when Barker became ill.

El Reno Mayor Matt White presented Barker with a posthumous key to the City of El Reno for her decades of historic research and preservation for the church, city, county, and state. Barker’s daughter, Lea Barker Ervin, received the key and framed proclamation on her mother’s behalf and expressed her gratitude for seeing Carolyn’s dream become a reality. 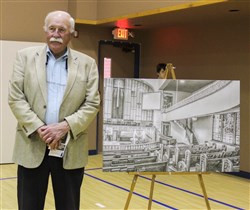 Neathery then told the audience that El Reno-Wesley’s Historic Site status was based on two factors that made the church historically significant. First, El Reno-Wesley traces its roots back to Rev. O. P. Light who was the first Christian minister of any denomination to preach a sermon in El Reno. Light came it El Reno in Oklahoma’s 1889 land run and would preach on street corners and benches made from borrowed lumber. Second, El Reno-Wesley is home to the largest church merger of congregations formerly divided on political lines (primarily centered around slavery), which occurred in 1948 and impacted approximately 15% of the town’s population.

The El Reno Chamber of Commerce presented El Reno-Wesley with a special recognition for its decades of sharing God’s word in El Reno and beyond. Chamber Executive Director Karen Nance presented Carson and Neathery with the framed certificate.

The event continued with the opening of a time capsule that was sealed in 1977. The contents included church memorabilia from 1977 and 1909. The cornerstone holding the time capsule and about half of the capsule’s contents were rescued after a 1975 fire destroyed the building of one of the two churches that merged almost 30 years earlier to become Wesley. Thankfully, the stained-glass windows belonging to the Methodist Church were removed when the building was sold, and several pieces of the original stained glass from the church that was engulfed in flames are on display at El Reno-Wesley and the nearby Canadian County Historical Museum.

The celebration then moved outside for the unveiling of the plaque denoting El Reno-Wesley as Historic Site 568 and all in attendance posed for a group picture on the Church’s steps, which date back to 1921. Finally, everyone enjoyed cake in the courtyard and an opportunity to look at old photographs, posters telling the history of the church and building, and various church memorabilia on loan from the Museum and Neathery family or from the church’s own archives.

“It was a heartwarming tribute to all who have delivered the good news of Jesus to our community, state, and world for over 100 years,” said long-time church member Terry Parrot. 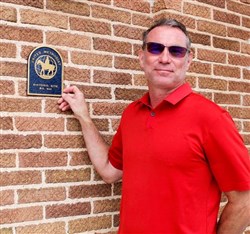 Member Dana Gibson added that she enjoyed learning so much new history and is excited for the day when her grandson, Jimmy Gibson, present at Sunday’s event, will be involved in opening the next time capsule.

The Church memorabilia and history information were kept on display until May 5; the contents of the time capsule went on display shortly thereafter. The time capsule will be refilled and resealed on Oct. 2 in conjunction with the sanctuary’s 100 year anniversary. A brochure depicting some of the church’s history and its basis for obtaining Historic Site designation is available by the church offices.