A smartly designed medical station and a playground for the youngest campers are the culmination of work upgrading the woodsy church campground beside a creek, near Tahlequah.

Special donors and other camp supporters received thank-you gifts that day from Egan manager Josh Pulver. Among those honored were Larry and Joanna Potts and Bob and Karen Williams, for major gifts to the Holliman Medical Station; and Patsi Smith and Jimmy and Kelly Nix, whose contributions made possible the Nix Family Playground.

"A lot of you have helped us, and we are thankful," Pulver told the luncheon audience before guests enjoyed a bird’s-eye view of all the Egan property, watching a video made by drone.

"This kind of ministry cannot happen except for the generosity God has placed in your heart," said Ed Parker, Conference Camps director. "Thank you for your gifts of time, talent, and treasure. We don’t take them for granted. They help us develop leaders out of all these little kids God gives us every year. This is one of the greatest places you can develop a leader."

Attendees moved outdoors to share prayers and Scripture beside each new structure, followed by tours. Also recently added at Egan are porch swings, a cluster of hammocks, and adirondack chairs. The chapel has been remodeled. And the Green Country District United Methodist Men funded the planting of 27 young trees, first replacements for more than 50 dead trees that were removed.

For the Williamses, both experienced in aspects of health care, supporting the Holliman Medical Station "was a no-brainer," said Karen. She is a nurse and educator, and Bob leads in the health administration field. They attend Bixby-First UMC.

Karen was age 12 when she first camped at Egan. She carried an inhaler with her because of asthma, she recalled. As a youth, she annually attended summer church camp — and continued as an adult volunteer until about 2010.

She also admitted to feeling anxious when her son attended camp due to his health conditions.

They clearly were pleased as they explored exam and recovery rooms, kitchen area, staff quarters, and waiting area in the medical station, all pleasingly furnished. The space also can serve as a family cabin. A large meeting room is part of the building, too.

An unexpected blessing for Karen that day confirmed church camp claims about forming friendships. Another guest, a young woman, recognized Karen as the adult who led her small group at a past youth camp. The youths had formed a prayer circle around Karen when she had to leave early for a family matter.

Patsi Nix of Tahlequah said she’s never camped at Egan, but she helped financially and physically build the playground. That project was done in memory of her father. "He loved the little kids."

As preschoolers made full use of the play space, a young mother pointed out her son, tears streaming down her face as she thanked Patsi for a special place "at last" in Egan for children his age.

Patsi’s nephew Jimmy said, "It’s easy to write a check. The real work comes from folks who put in the sweat equity, like Josh and his people," to extend hospitality at Egan Camp.

Centered among cabins, the new Holliman Medical Station includes a back deck overlooking the creek at Egan Camp and Retreat Center near Tahlequah. The building includes a large meeting room, at right, with exam and recovery rooms, waiting area, and rooms to house medical staff at left. 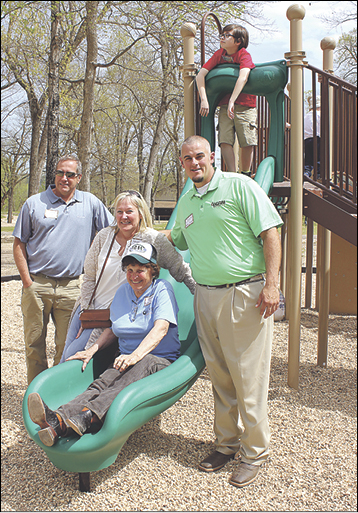 Patsi Nix takes a turn on the slide at the new Nix Family Playground at Egan. With her are, from left, Jimmy and Kelly Nix and camp manager Josh Pulver. 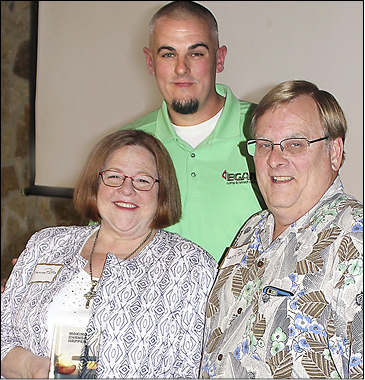 Joanna and Larry Potts, members of the extended Holliman family, are honored by Egan manager Josh Pulver, at back, for their generosity that undergirded construction of Holliman Medical Center at camp. 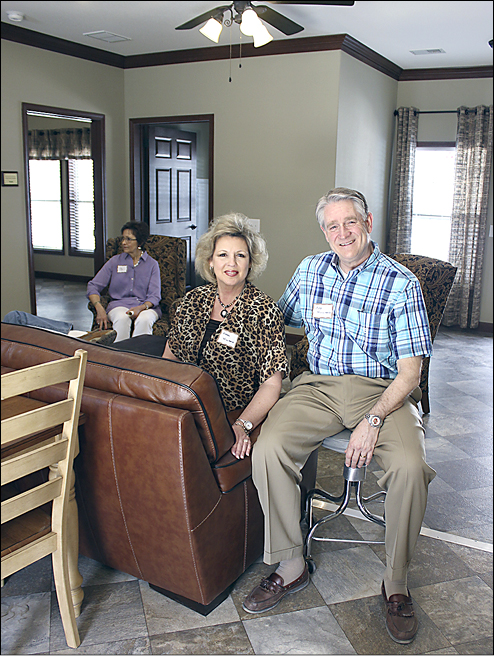 Healthcare professionals Karen and Bob Williams pause in the waiting area while touring the new Holliman Medical Station. In background is Flo Conklin, who chairs the Egan Site Committee.