In each of three worship services Jan. 31, the people of Edmond’s First United Methodist Church happily spent time consecrating their new building. They sat together for a First family meal, and then they toured every floor of their church.

Much has changed since ground was broken in 2012 beside the sanctuary building at the corner of Hurd and Jackson Streets — and not only the physical structure.

First UMC welcomed 68 new members last year. A total of 23 students, and 21 of their parents, are taking Confirmation classes. An alternative worship experience launched in December, and 112 people attended it on Jan. 31.

Senior Pastor Sam Powers declared, "We’ve dealt with a lot in getting this building done. God continues to work through our church!"

"Rejoice that God so moved the hearts of people that this house has been built for praise and prayer," Crossroads District Superintendent Rockford Johnson read from the liturgy.

Andrew Schaeffer, the director of music ministries, later said he saw God that day "in the choir members’ smiles." Organ and choral music are regarded highly in the life of First UMC, established in 1889.

Edmond’s young families "yearn in the midst of new building for a church that really treasures time-honored expressions of worship," Schaeffer said. "People want authenticity. There’s something so special about older churches."

The sanctuary building is almost 90 years old, yet the exterior of the new construction matches well, said a pleased JoAnn Logan, who chaired the New Building Committee.

Flooding interrupted the work three times, but First UMC prevailed and the basement now is sealed, she said.

At 13,000 square feet, the new building has a spacious, ground-level foyer with covered portico; multipurpose Wesley Hall, which seats up to 200; and nine more classrooms.

Digital technology has been installed throughout the church, and worship is streamed live on the Internet. First Church also now has four elevators and a lift.

Among renovations, the nursery was relocated very near the sanctuary. Logan said surveys show that is a top-10 requirement for young families.

The project cost about $3.8 million, according to church officials.

The newest portion of Edmond-First, with a covered portico, extends right in this scene as people exit worship to tour. 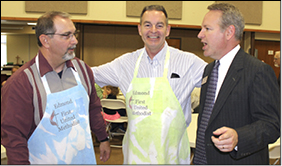