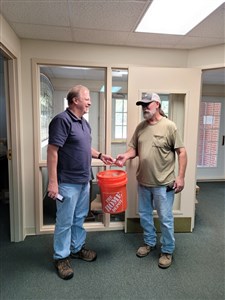 Mark Jardine receives flood buckets and assistance after storms ravaged the Idabel area. Flood buckets are a vital part of the cleanup effort in the wake of a storm. Submitted photos.

Idabel United Methodist Church is the center of a disaster response after severe storms, tornadoes, and straight-line winds swepth through Bryan, LeFlore, and McCurtain counties.

Mark Jardine and leaders from his church are working with partners and volunteers to assess the damage caused by the storm. Disaster response coordinator Dana Parker took flood buckets and clean-up kits, but she says there is still more to do.

“It’s not just the day after the storm when people need help,” said Parker. “Volunteers will be needed long after the initial shock wears off.”

Emergency response teams and chainsaw operators will likely be needed in the short term. UMCOR and our disaster response team are working on long-term case management for impacted residents.

Churches and individuals who would like to help out immediately can make a donation online here, 100 percent of which will go to Idabel. Churches are encouraged to take up a special offering, which can be remitted to the conference treasurer’s office using line 775 on the contribution form.

Churches are asked to hold those affected in their prayers in the coming days and months. Recovery will be a long-term process.