"Apparently, we had a tornado," said Pastor Steve Harshaw, as he looked over what remained of Davis' First United Methodist Church after a storm the night of April 26.

The storm caused the building’s roof to collapse into the sanctuary. Some of the church’s stained glass windows lay shattered on the ground, while others remained intact.

The church, which was built in the 1940s, has been condemned; the sanctuary is considered a total loss, Rev. Harshaw said.

No one was injured, Harshaw said.

As damage to the church was being surveyed and workers began hauling away debris, Harshaw was considering where to have Sunday’s service.

"We’ve had several offers from other churches," he said. Other possibilities are to use Davis UMC’s fellowship hall or just to gather on the grounds of the church, he said.

Member Ben Randall rushed over to the church as soon as he saw a message on Facebook that the building had been heavily damaged. He and others went in to rescue the Bible from the altar, along with candelabra and offering plates.

The storm may have come at an opportune time, Randall said. The church had been arranging to expand its facility, and then the storm happened.

"I feel like God has a plan for us. He wants us to do something different," Randall said. 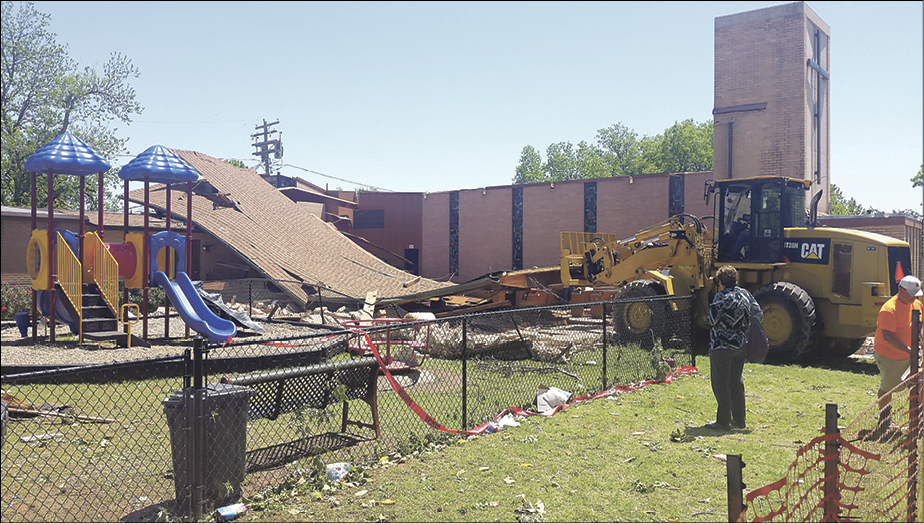 Heavy equipment moves in April 27 to clear the fallen sanctuary roof and other debris at Davis-First UMC, between the children’s playground and one sanctuary wall.
Photo by Andrew Himes