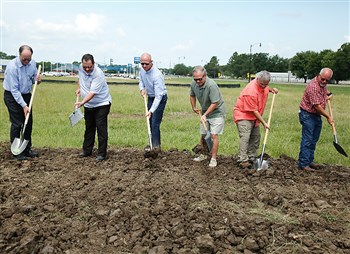 Two years after a wind storm destroyed their sanctuary, Davis United Methodist Church has broken ground on a new building in a better location.

The groundbreaking on the new 10,500 square-foot building took place on July 10. Pastor Steve Harshaw said the congregation is excited and ready for a change.

“It’s been over two years now… and we’ve all had to suffer with this a bit,” Harshaw said. “I think we’ll be glad to have a fellowship hall and a sanctuary again!”

Since the storm, the congregation has been holding worship in the fellowship hall. Though it also suffered damage, officials determined the space was safe for use. In spite of the cramped space, Harshaw said that members have continued to attend, give, and reach out to the community.

“We believe God’s still at work, and we’re trying to make use of this as an opportunity,” Harshaw said. “The church may not have another opportunity like this in its life, so we want to do everything we can to make this work for the church.”

On April 26, 2016, a storm with 90 mph straight-line winds destroyed the Davis UMC sanctuary. A capital campaign for expansion was already underway, so the church prayed about whether or not rebuilding the sanctuary was an opportunity to relocate the church. A few months later, the congregation decided to pursue relocation.

Harshaw said that shortly after making the decision to relocate, the city of Davis offered to buy the church’s property. Shortly after that, a church member donated land to the church that was close to the highway.

“It seems like God is in the middle of this,” Harshaw said. “There’s too many things that came together for it to be otherwise.”

Harshaw believes it would have been a mistake for the church to close itself off to focus on rebuilding, and he encourages other churches in the midst of disaster to trust God to provide the people and resources needed for recovery.

“When you’re building a new building, it’s hard to do, but be in prayer and trust that God will work it out,” he said. “You have to continue to be the church and let God work in the midst of it.”