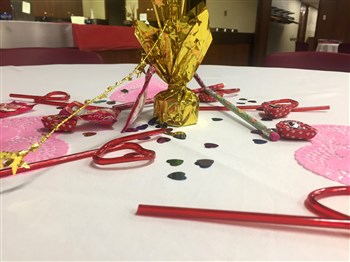 Centerpiece for the annual Daddy/Daughter Dance at Enid-First. Photo via Enid-First Facebook gallery.
By Meagan Ewton

The annual dance started in 2000 with a gathering of dads and daughters from the congregation. Last year, they began to invite girls who attended the church preschool as well. This year’s dance was organized by Leslie Klamm.

“We have expanded to ‘special guys’ knowing that sometimes dads are not in the picture,” Klamm said. “We usually have a grandpa or two bring their little gals along.”

In addition to dancing, attendants did crafts, enjoyed snacks, played musical chairs, competed in limbo and won prizes. Though similar events are held throughout the Enid community, Klamm said they usually have around 50 dads and daughters attend.

After everyone is finished dancing the night away, the girls are sent a thank you card and a photo of them with their dad as a memento of the evening. Klamm said printed photos might be a bit old-fashioned, but for little girls, it’s still a special gift.

“The little girls just love dressing up; some get their daughters corsages,” she said. “To see the girls get their daddy’s undivided attention is priceless.”