About 60 people saw Steve Bear of Tulsa honored as volunteer of the year and heard keynote speaker Tony Altizer of Oklahoma City. Both support CJAMM’s two Exodus House programs for newly released offenders and their families.

The March 13 luncheon was hosted by OKC-First United Methodist Church.

Bear "is someone who exemplifies to me servant spirit," said Greg Boyd, pastor of Tulsa-St. Luke’s Redemption United Methodist Church. "He’s done things I’m grateful for, that I wouldn’t know how to do. God bless you, my brother; you are something else."

Bear was humble. "Every volunteer deserves this recognition."

He gestured to the audience, "You come every week seeking to change the lives and hearts of somebody, to restore their families, to give them hope. It’s an encounter that God has created."

He began volunteering about 10 years ago after meeting a Tulsa Exodus House resident. "She’s now my wife and my best friend. I’ve been very blesssed."

Altizer is an Exodus House graduate. "God showed up right off the bat" in his assignment to a drug rehab program at a correctional center, he said. Then he learned about Exodus House from another offender. He also began going to church while incarcerated.

"I believed in God but didn’t know what his plans were for me. I had burned all my bridges," he said.

But he did know he would need support, so he applied and "I was one of the few who get to come to Exodus House."

The prison recidivism rate is astonishingly low — 3.7 percent — for Exodus House graduates, according to April Sellers White of Sapulpa, vice chairperson of the CJAMM Board of Directors and a retired judge.

For other offenders, that rate is 30 percent, she said.

Altizer said the program "was so much more than I expected."

He described the nicely furnished apartment and supportive housing sponsor; life skills classes, spiritual development, counseling, and 12-step sessions. He even received a gift card to purchase underwear and socks, "which was amazing," he said.

He has been "blown away by the passion and caring" of people in this ministry. After graduating he worked in construction. He recently became facility manager at Exodus House in Oklahoma City.

CJAMM reported that volunteers annually serve more than 57,000 hours in various facets of its nonprofit ministry. Interim director is Lesa Rhoads; contact her at 405-530-2014 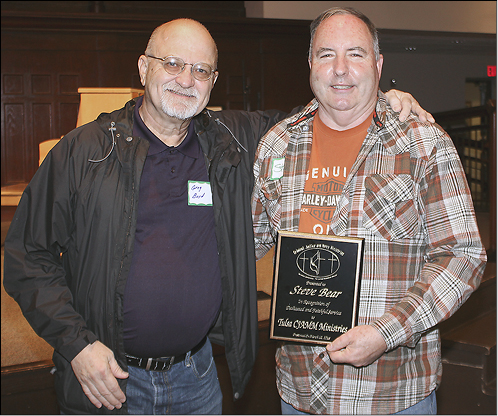 ‘God bless you, my brother; you are something else’ —Pastor Greg Boyd, left, thanks Steve Bear of Tulsa. 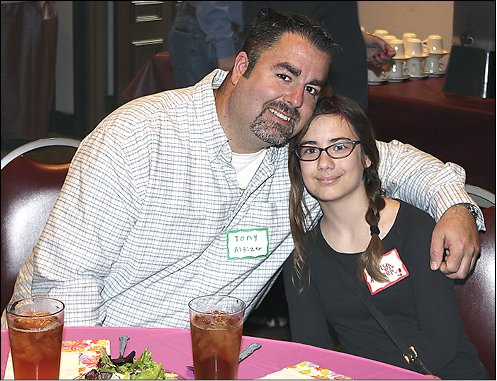