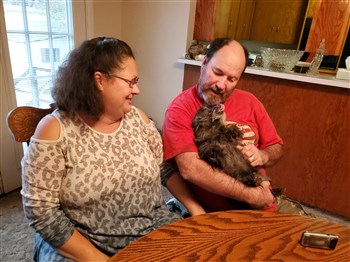 Billy and Lisa Sparks sit with their dog Rosie as she attempts to lick Billy’s beard. Rosie hid under a blanket during the fire that burned the back of the Sparks’ home.

Billy Sparks woke on Nov. 2, 2019 to the sound of a neighbor yelling for him to get to safety. At first he thought it was a bad joke, but when he opened his eyes and saw the black smoke, he knew it was true. His house was on fire.

He and his wife, Lisa, woke in time to escape the flames, and firefighters were called to put out the blaze. The fire had been concentrated at the rear of the house, but the damage was extensive enough to leave the house unusable.

By the time the fire was out, Saturday night had turned to Sunday morning. Neighbors and church friends offered what food, clothing or shelter they had available. Unsure of their next step, Billy and Lisa went to their home church, Wilburton UMC. That day, the church voted to let the Sparks to live in the parsonage until their home was fixed.

“The people in this place, it’s just amazing. I’ve never met anybody like this in my life,” Billy said. “They gave us their homes to live in. They gave us food, shelter, clothing. They gave us love—unconditional love.”

Billy and his wife, Lisa, have encountered difficulties during the rebuilding process. Despite his professional experience in building houses, Billy spent the first several weeks unable to help because he was recovering from an emergency surgery he had received just days before the fire.

A photo posted to Wilburton UMC’s Facebook page on Jan. 2 shows how much work still needs to be done before the Sparks can return to their home.

“It’s very humbling to let people come in and take care of you, to ask what do you need, and mean it,” Billy said. “It’s something I ain’t never experienced.”

The couple is on a fixed income, so Lisa set up a GoFundMe page to help offset the cost of repairs. So far they’ve raised approximately 40 percent of their goal. She said there have been multiple situations since the fire that have reminded her of God’s grace and presence.

“In the midst of all of this, God’s always ahead of us,” Lisa said. “God provides. Sometimes long before we have the need, he’s fixed the problem.”

The Sparks are working to fix their house by spring. Lisa said she wished everyone had a church family like hers.

“It’s hard, but it’s beautiful at the same time to see how amazing God really is,” Lisa said. “For all the ugliness in the world, it’s so good to be in contact with people that are so good and are such beautiful examples of what life should be and what people should be like.”