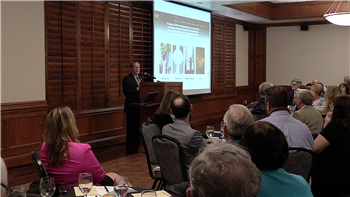 On Tuesday, Sept. 11 the Criminal Justice and Mercy Ministries (CJAMM) hosted a Benefit Dinner and Silent Auction to help support the continuing work of CJAMM and to present the annual Stan Basler Award.

This year’s honoree is Dr. Robert “Bob” Spinks, director of the Non-Profit Leadership Program and professor of sociology and justice studies at Oklahoma City University.

“Dr. Spinks used his education and experience in non-profits to help CJAMM become a 501c3,” said Kristen Harlin, CJAMM’s current director. “Under his leadership as our board chair, he has been able to assist us with fundraising and networking to make the transition successful. He has been a vital part in CJAMM becoming a standalone organization.”

The award, named after founding director Dr. Stan Basler, honors those who have shown excellence in the work of restorative justice. Many of Spinks’ former students attended the event.

“How privileged this organization is to have its founding director still involved with it,” Spinks said. “You don’t always have that history and continuity that a former director provides, so I can’t think of anyone in whose name I’d rather receive an award than Stan.”

The mission of CJAMM is to break generational cycles of incarceration. While Oklahoma is ranked number one for incarceration in the nation, 98.3 percent of the people who graduate from CJAMM programs do not return to prison.

The proceeds from the evening’s silent auction and donations will be used to support CJAMM programs in Oklahoma City, Tulsa, Lawton and across the state.