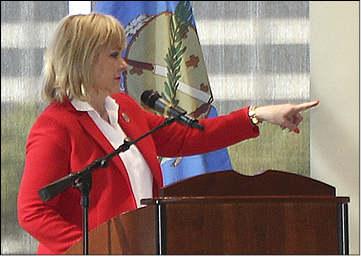 Gov. Mary Fallin’s new initiative to find foster and adoptive homes for children who need them is an encouraging step, said Mike Slack, vice president of development for the Oklahoma United Methodist Circle of Care.

Slack was among the officials present at Fallin’s Nov. 12 announcement of the Oklahoma Fosters Initiative. The governor made the announcement at the Oklahoma Historical Society, across the street from the Capitol.

Fallin urged a wide-ranging group of organizations to band together for a "full-court press" to create 1,000 new foster families in Oklahoma by June 2016.

The governor said she hopes to "change the trajectory of children in our state who are living in crisis." There are an estimated 11,000 children in Oklahoma living in some form of state custody, she said.

Circle of Care has partnered in the last year with the 111 Project, whose mission is "to engage one church to support one family to care for one child through fostering or adoption," Slack said later.

The project is the governor’s primary liaison to faith communities for this initiative. Chris Campbell, executive director, will be the keynote speaker for Circle of Care’s fundraising banquet in April.

Since 1999 Circle of Care has operated the Child SHARE program, which recruits, trains, and supports foster parents.

The United Methodist agency has held two events in Tulsa this year for church leaders and pastors "to start some enthusiasm for addressing foster care through the church," Slack said.

Goal of the events was "to light a spark and find ways for churches to really own this ministry," he said. The hope is that a leader will emerge in each church to spark efforts to recruit foster parents in that congregation and community.

Gov. Fallin, the daughter of a social worker, said she has been aware since an early age of the problems facing children in troubled families. Her mother "would pick up a child in the middle of the night," Fallin said. Sometimes, she would get out of bed and go with her mother.

"That’s what our DHS social workers do all the time," Fallin said.

Flanking the audience in the museum atrium Nov. 12 were displays of studio-quality photos of some of the Oklahoma children who need homes.

Another speaker told the group about her life until she was adopted at age 17.

"Growing up was always unstable," Marissa said. Her mother relied on drugs and prostitution to survive. Marissa began using drugs in the fourth grade "because everyone else around was doing it."

At age 15, she looked in the mirror and asked herself, "Is this who you really want to be?" She prayed for a change in her life. After her mother’s arrest, Marissa was placed in shelters and foster care, leading to her adoption.

Offering the viewpoint of a foster parent was Matt Pinnell.

He and his wife, who had three children and were expecting a fourth, had talked about becoming foster parents, but there were always good excuses not to, he said. Finally they decided "it was time to stop talking and start doing," he said.

The experience has been so enriching that they’ve decided "we’re going to continue to foster," Pinnell said.

Slack said the governor’s initiative will "bring together people from the public sector, faith-based community, and the philanthropic community" to help children. It will result in "partnerships that Circle of Care has never had before."

Also speaking at the governor’s event was Ed Lake, director of the Oklahoma Department of Human Services. The initiative represents "the right way to serve children who are abused and neglected," he said.