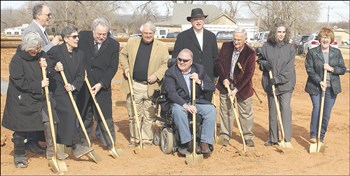 Representatives of Alva-First UMC, the Oklahoma United Methodist Foundation, and Circle of Care break ground in Alva for a foster home that will enable siblings in protective state custody to stay together. Bishop Jimmy Nunn is second from left in this photo. photo by Chris Schutz.
BY CHRIS SCHUTZ
ALVA, Okla. — Bishop Jimmy Nunn stood in the dust and wind at the groundbreaking for a Circle of Care sibling foster home in Alva and declared with a smile and a Texas drawl, “Y’all are the Soonest!”
The house, named in honor of benefactress Vera Mae Eversole, is the first in a series of Circle of Care homes around the state that will accommodate sets of foster siblings.
Carol Cook Moore, pastor of Alva-First United Methodist Church, declared the site holy ground and said the idea for Vera Mae Home is proof that “visions are gifts from God.”
Land for the home was donated by retired banker Bill Buckles and his wife, Billie. “We were extremely blessed and are trying to give back,” Buckles said. The idea to build the home was broached to the congregation by First UMC’s pastor, he said.
The late Vera Mae was a widow whose wealth came from land and mineral rights, Buckles said. She “was a sweet lady. She had a good heart.”
She was known for loving her dogs and cats, he said, and made provisions for their care after her death. “She lived very frugally and saved her money,” he said.
Bill Junk, president of the Oklahoma United Methodist Foundation, said Vera Mae would be pleased by the project that carries her name. The goal is to create “something that feels like home” for the foster children, he said. 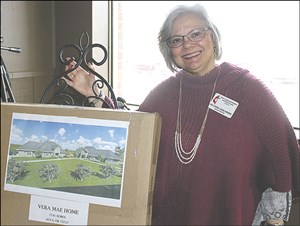 “I can’t imagine she wouldn’t have been smiling in Heaven” as ground was broken, he said.
Currently in Oklahoma, three siblings in protective state custody have only a 65 percent chance of being placed together, according to Circle of Care officials. For four siblings, that possibility falls to 45 percent. There is only a 20 percent chance for five siblings to stay together.
To improve those odds, Circle of Care is building the home in Alva and plans others in Elk City, Enid, Shawnee, Woodward, and Coweta, according to Don Batson, president and CEO of Circle of Care.
Some sites will have two homes. The children will be nurtured by foster parents.
The 2,700-square-foot Vera Mae Home will have four bedrooms and four baths at a cost of $300,000. It will also have a storm shelter in the garage.
Bishop Nunn, who shared that he is an adopted child, said he can relate to the foster children who will live in the Alva residence. If he hadn’t been adopted, “what would have become of me otherwise?” he wondered.
He said the youngsters who live in the new home will be able to say, “This is the place where we’re loved and we’re cared for.”
“Look what God has done, working through us,” Nunn said Jan. 31. “Many generations of people will be affected for the good. We’re trying to hold together those family units.”
He commended those involved with the project for their “vision and commitment and partnership.”
During the groundbreaking ceremony, he prayed, “Bless this land given for the care of children. Bless the builders and workers preparing a home. Make it a safe haven where healing will come, hope will reside, and joy will rise up. Raise up foster parents equipped for this good work.”
President Batson estimated the house will be finished in six or seven months. “Not too many months down the road, we’re gonna be holding a ribbon-cutting,” he said at the ceremony.