Churches help out during walkout 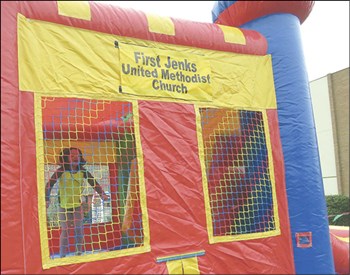 A bounce castle entertained children at Jenks-First.
BY CHRIS SCHUTZ

United Methodists across Oklahoma stepped up to help when public schools closed, some for 10 days, in early April during a teacher walkout and protests at the Capitol about education. Churches’ responses in their communities ranged from operating day camps to feeding students during their unexpected vacations.

The Conference’s Young Peoples Ministry made available children’s curriculum from past summer camps, and 14 groups accessed that for their temporary programming, according to Charlie Ludden, associate director.

At the Capitol, some clergy and laity prayed and advocated for changes in Oklahoma’s education system.

As it became apparent that Elk City teachers would walk out, church members knew some parents would need someone to watch their children, said Pastor Terry Koehn.

Elk City UMC hosted a day camp during the three days schools were closed in that district in far western Oklahoma.

In opening to the children of the community, that church was following Bishop Jimmy Nunn’s advice for churches around the Conference to connect with schools, Rev. Koehn said. “We did what we could.”

On the first day, there were eight children at the camp; the total hit 27 on the third day.

Koehn praised some public school teachers who helped at the church with the event styled like a Vacation Bible School. “It’s not like they were home with their feet up,” he said of the teachers.

The church set up a check-in table, with a checkout code word for each child, he said, for safety.

Church staff and volunteers shopped for breakfast and snack foods. Sunday school classes provided some food. For lunches, pizzas and burgers were popular.

Elk City UMC was among the churches that utilized the materials furnished by the Young Peoples Ministry.

The children also made crafts, watched movies, and enjoyed supervised playtime in the church gym and at a nearby park.

When it came to counting the kids busily running around the gym, leaders knew to tell everyone to “freeze” for the count, Koehn said.

He praised the teachers for recruiting others to help. “They made it go,” he said.

“It took a lot of helping hands and caring hearts to make it happen.”

A month before the teacher walkout, members of Tahlequah-First UMC began planning ways the church could help families that would be affected, said Pastor Matt Franks. The church determined it could accommodate 50 children from 8 a.m. to 5 p.m. during weekdays.

What was called “Camp Wesley” ran for nine days while schools were closed. On average, 32 children attended, from kindergartners through fifth-graders, he said.

Students active in the Wesley Foundation at NSU came to help. Players on the NSU women’s basketball team even led a basketball clinic.

As the days stretched on and schools remained closed, NSU students’ help provided “fresh legs” and respite for some volunteers in the First UMC project, Rev. Franks said.

Breakfast and lunch at the church were furnished by the school system, he said. Any child or teen could eat.

By welcoming members of the community to help, the church was able “to make some connections … with people we hadn’t ever spent time with,” Franks said.

Another positive result he reported from Camp Wesley was that a new family as well as some neighborhood children without their parents attended Sunday morning.

In all, hosting Camp Wesley was “a big and uplifting thing for the church.” It proved the church was “willing to take on a large mountain,” Franks said.

Rudy Freese, pastor at Jenks-First UMC, estimated 30 children per day, in grades K through 4, came to the day camp operated by the church.

First Church arranged with some guest groups to present activities for the children, including a visit by firefighters who showed off a fire truck, a presentation by the Tulsa Opera, and a skit by Newspring Family Church.

The camp offered a rotating schedule similar to many Vacation Bible Schools, with centers for science, reading, crafts, Bible study, and recreation time, Rev. Freese said. Local pizza and chicken restaurants donated food for lunch on some of the days, he said.

The church gave a Bible to each participant.

Freese also said at least one family whose child was at the camp later attended Sunday worship.

A sampling of other churches’ actions:

Be an advocate for education