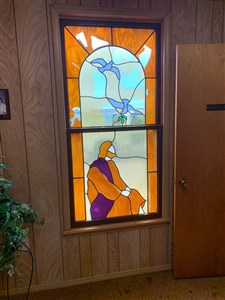 “It could have been much worse, but it looks really, really bad,” said Rev. Cydni Tillery. “Everybody has said it’s heartbreaking to see the building take that kind of a beating, but it’s just a building; it’s not the church. We’ll get it fixed up and get it ready to go again.”

Tillery and a small group of church leaders gathered at the church the morning after the storm to assess the damage and secure the building. The damage was most significant on the north side of the building, and damage to the roof was minimal.

“Everything that faced north was just battered,” Tillery said. “[The siding] looked like there were holes all punched in it, and windows were just broken, including the children’s Sunday school classroom.”

Tillery said she and others in the group wore masks and practiced social distancing while cleaning up the debris from the storm. She said she hopes the building is repaired by the time members are able to return for in-person services.

“Handshakes and hugs are a cornerstone of what they believe in; it’s rough to have to keep them apart,” Tillery said. “They’re just really fantastic folks, and when things come up, they take care of it and they take care of each other.”