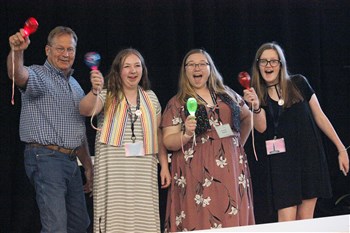 Chuck Stewart (left) shakes a light-up maraca with three youth delegates during a break at the 2019 Oklahoma Annual Conference. Stewart, who is also a Lay Delegate to Jurisdictional Conference, will continue to serve as the Lay Leader for the Oklahoma Conference until another Lay Leader is elected in 2020. Photo by Meagan Ewton.
Oklahoma United Methodist Camps has announced Chuck Stewart as the new director of Egan Camp and Retreat Center.

Stewart is a certified Lay Servant and has served as the Oklahoma Conference Lay Leader since 2012. He will be taking on the role vacated by Josh Pulver, whose final day was Aug. 31.

Ed Parker, director of camp and retreat ministries, described Stewart as a self-motivated learner and a man with a vision.

“I think he’s got a vision for impacting people’s lives and tying the mission of Egan into the our mission as a conference to make disciples of Christ,” Parker said. “This is a new chapter with new possibilities and new potential.”

One goal Stewart and Parker will work toward is a successful conclusion of the debt on Holliman Lodge.

“I think he’s got a great understanding of the behind-the-scenes property and logistical issues,” Parker said. “He’s familiar with the whole area because he lives there, and he’s been active on the site committee. He even helped Josh dig the mud pit.”

In a video statement released by Egan Camp and Retreat Center on Aug. 28, Pulver shared his excitement for Stewart’s leadership at the camp and wished the new director well.

“Chuck’s been a true blessing to Egan and to me personally for a long time, so I really can’t think of anybody else that I’m more excited to hand the keys over to than to you,” Pulver said.

“I appreciate that you trust me with so many keys and I hope that in the next year I can figure out what they all go to,” Stewart replied. “Know that the things you did here at Egan have really made a difference in people’s lives.”

Stewart, who was also elected a Lay Delegate to next year’s General and Jurisdictional Conferences, will continue to serve as the OKUMC Lay Leader until another person can be elected during the 2020 Oklahoma Annual Conference.