Chaplain encounters the unexpected on mission

8/18/2017
‘This is one way churches can be involved in ministry to families ... Speaking as a father, it’s worth finding a way.’— Creighton Alexander

He’d only been involved two years. He’s an assistant Scoutmaster in Ada, where his two sons are Scouts.

He could have tossed that letter. After all, the addressee was "Pastor"; the solicitation wasn’t personal. And he was newly appointed, mid-term, to Harrah United Methodist Church and the Oklahoma Conference.

He’d camped with his sons almost 50 times. During 18 years of campus ministry, he’d built up experience on mission trips with college students.

"I thought: I can help with that."

Then he was assigned to minister to the adult volunteers staffing the event. One man turned 91 during the July jamboree.

"One of the toughest mission trips I’ve ever been on," he remarked after returning to Oklahoma and his newest appointment, associate pastor at Edmond-Acts 2 UMC.

He voiced deepest gratitude to Acts 2 for allowing him to fulfill the chaplaincy commitment he had made before the move.

At Jamboree, he ministered to adults who had given two weeks of their time and paid their own way to support the Scouts, "but they’re still people. You have life or circumstances of the Spirit pressing on you. Things come up. Life doesn’t leave you alone when you go on vacation, when you go to serve somewhere."

Alexander walked a lot on the sprawling 11,000-acre property where the jamboree is held every four years. He counseled adults in failing marriages, grieving loved ones, and those homesick; mediated staff disputes; gave comfort amid medical crises, from dehydration to broken bones; "and another 100 incidents."

"For some reason, dusk to dawn was when we were the busiest as Scouts and Scouters found their way back to their tents."

He said, "My team took it upon ourselves pretty quickly to look staffers in the eye and ask how are you doing. I feel God kept putting us in places where we were able to be pastors."

The 11 chaplains at Echo Base Camp met together as each day began. A total of 76 chaplains served, from various faith groups. Alexander said the United Methodist chaplains, 15 in all, were the second-largest group.

He recalled the welcomes when he’d arrive at programming sites. Chaplains wore distinctive clothing. A patient in a medical tent was joyful: "I was hoping I could pray with a chaplain."

Jamboree was a father-son experience on another level, too. Alexander’s oldest son, Canon, age 15, also attended.

But they only saw each other twice. Canon needed help to get a sleeping bag.

Then on July 23, standing side by side, father and son served Holy Communion during a United Methodist worship service on the property.

United Methodist churches’ support for Scouting must continue, Alexander stressed when interviewed. He worries that connection is weakening, despite the denomination’s longtime commitment to Scouting and readiness to help local efforts through the national structure of United Methodist Men.

"We have such a great track record. (Scouting is) one way churches can be involved in ministry to families, through these young people. This is a way of being in mission, not just a group meeting at the church. Continue to say yes to that mission.

"Speaking as a father, it’s worth finding a way to keep doing it," Alexander said.

KNOW MORE — Sam Welch is the Conference’s coordinator of Scouting Ministries and Civic Youth-Serving Agencies. He has resources plus details on UM honors for Scouting units and individuals, such as the PRAY Awards. Email him at swelch3579@hotmail.com. 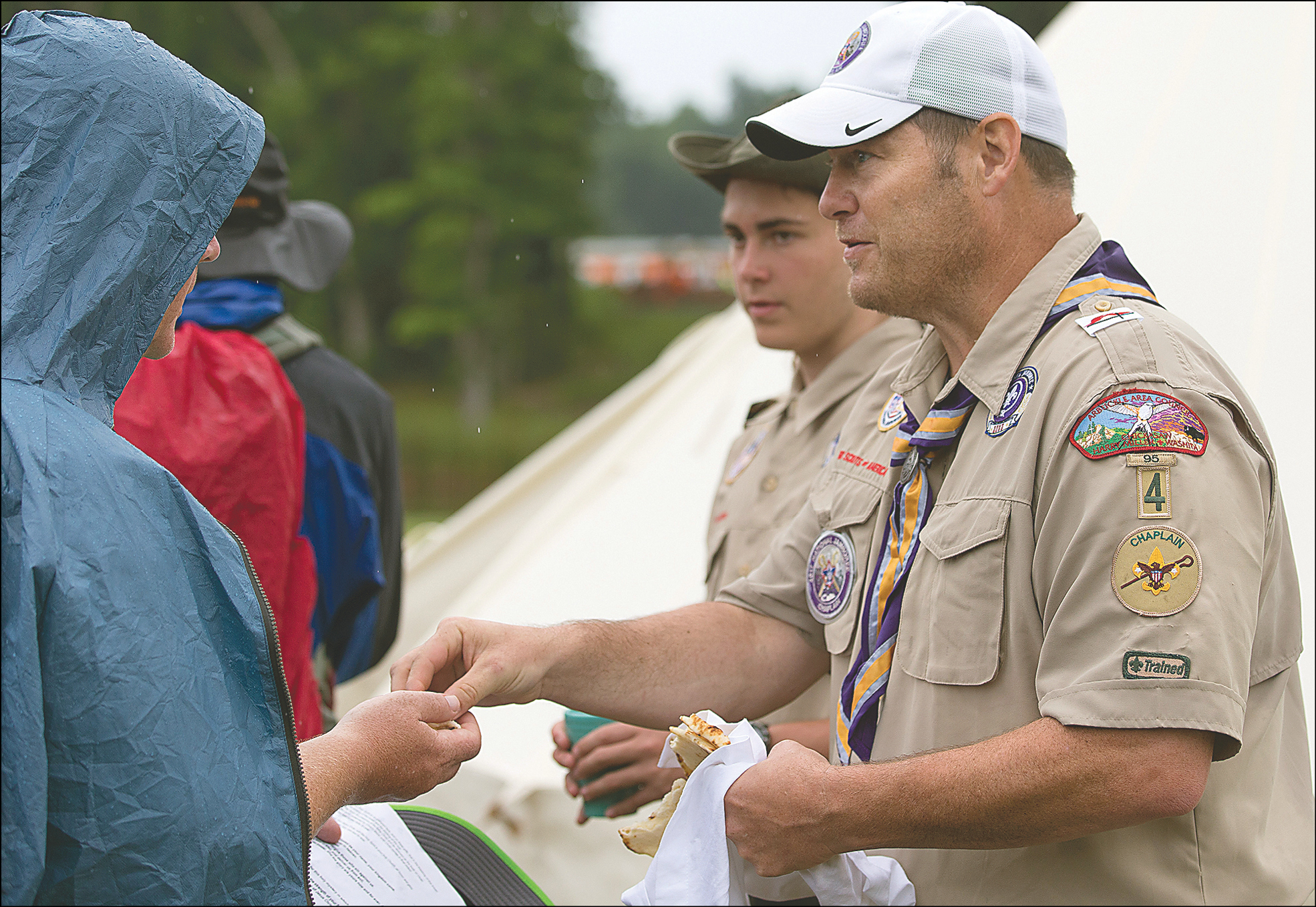 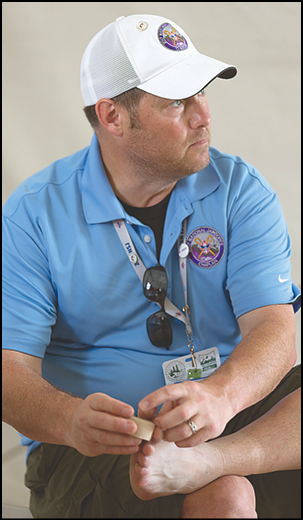 Above, Creighton Alexander patches up his feet for a day of walking ministry. At right, he visits and prays with Kevin Cordray. 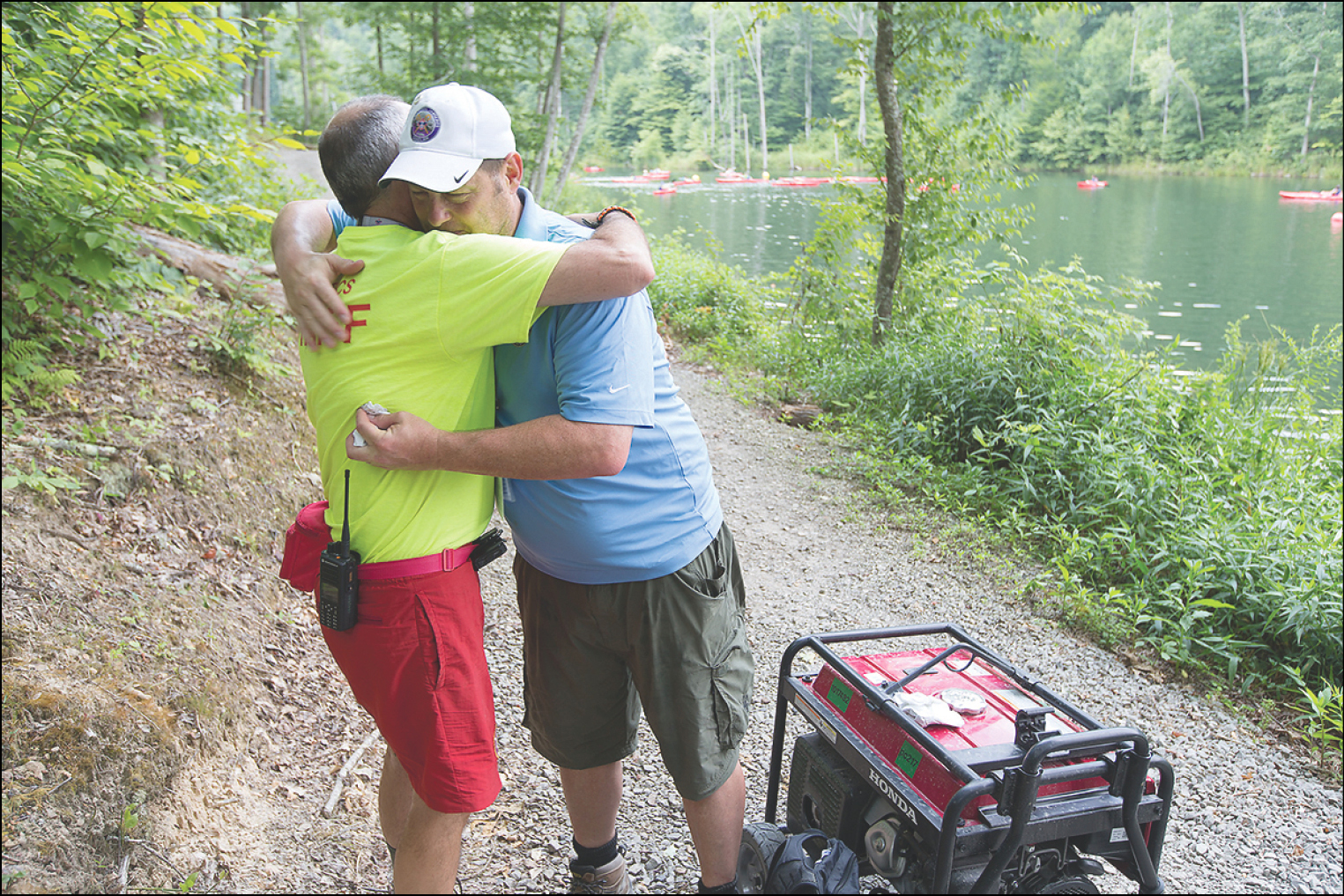