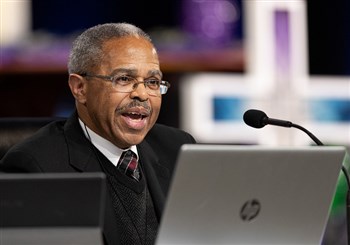 The Rev. Joe Harris presides over the work of the legislative committee of the 2019 United Methodist General Conference in St. Louis. Photo by Mike DuBose, UMNS.
By Meagan Ewton

Even before he was elected the chair of the legislative committee, Rev. Dr. Joseph Harris knew the stakes would be high at this year’s special called General Conference.

“There are passions and there are desires that people have on the question of human sexuality that the church has been dealing with for every General Conference I’ve been to and before that,” Harris said the evening of his election. “What comes out of here won’t be the end, but may very well be the beginning of the end.”

“This special called General Conference is unique in Methodism,” Harris said. “We’ll try to get through everything that’s before us, and we’ll see in the end what that produces for the church.”

Harris started his ministry career in 1981, serving as an associate pastor at Asbury UMC in Tulsa, Oklahoma and a senior pastor at Quayle UMC in Oklahoma City before being appointed Oklahoma’s first African American district superintendent in 1989. After eight years of pastoral service and conference leadership, Harris experienced another first: being named the first general secretary of the newly formed United Methodist Men in Nashville, Tennessee.

Donald Wood, a retired GNTV Media Ministry leader, said he’s known Harris since his time with UMM. As a media observer, Wood felt that Harris was the best choice to lead the legislative committee.

“He has done amazing things for the denomination,” Wood said during proceedings. “There’s nobody better in this room than Joe to handle it. He’s knowledgeable, he knows the Discipline, and he cares.”

Harris shaped and championed the work of the UMM between 1997 and 2005, including forming meet-and-eat sessions, connecting with scouting ministries, creating the largest conference for historically African American Methodist denominations, developing “Strength for Service” and establishing a worldwide movement of Methodist men through the World Methodist Council. For his service, Harris was awarded the Silver Buffalo Award from the Boy Scouts of America and inducted into the John Wesley Society by the UMM Foundation.

In 2005, Harris was called back to service in Oklahoma, this time as the Director of Communications for the conference and Assistant to the Bishop. Since his appointment, Harris has also added conference secretary to his work within the conference. Bishop Jimmy Nunn, who leads the Oklahoma Conference, applauded Harris’s election as legislative chair.

“The election of Dr. Joe Harris as the chair of the General Conference committee affirms his love of the church, his service across the denomination, and his leadership gifts,” Nunn said at the time of election. “He will lead in this role with the same fairness, thoroughness and integrity that he exhibits in the Oklahoma Conference.”

During the legislative session, only the Traditional Plan received enough votes to be considered for adoption by the denomination.

“The tendency for any institution is to stay kind of settled the way it is; it’s not satisfactory for people who want to see something different happen,” he said. “Institutions by nature are difficult to move, and the United Methodist Church is no different.”

Harris acknowledged before the legislative session that the personal feelings of delegates would likely play a part during the proceedings, though he added discernment is necessary to determine whether feelings are from God or from personal preference.

“The important thing for those of us who are faith believers is to believe that the Holy Spirit can mold and shape us each and every day,” Harris said. “Tomorrow’s a different day, and if I can learn something from today that can lead me into tomorrow, I’ll be a better disciple and hopefully help attract more people to the kingdom.”

As Harris chaired the procedures during the legislative session, he was aware that the world was watching. He considered General Conference a way for the Holy Spirit to move through the denomination and make people have difficult conversations with each other.