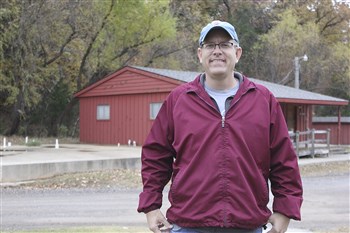 David Combs, director of Canyon Camp, stands near the concrete foundation where the new nurse’s station will be built. The camp has raised nearly half of the $40,000 they need to complete the project.
By Meagan Ewton

Canyon Camp is raising $40,000 for a new nurse’s station that they hope to build in time for the summer season, according to Director David Combs.

The camp began to focus on fundraising for the cabin this fall by reaching out to churches and individuals in western Oklahoma. Combs said the camp has seen gifts ranging from $100 to $1,000, so far totaling nearly half of the needed funds.

The new station will be adjacent to the dean’s cabin, centralizing leadership and medical services for camp-goers. The former station was torn down to allow for construction of Milburn Cabin, which was dedicated in 2015. Since that time, the nurse’s station has operated out of the dean’s cabin, requiring schedule adjustments and alternate accommodations for camp deans. Combs said nurses who serve on the camp site’s (advisory?) board and have volunteered as camp nurses have helped provide input for the new cabin, including feedback on materials and layout.

“It’ll be a nicer facility for nurses to administer first aid,” Combs said.

In addition to raising funds, the camp is inviting volunteers to help construct the cabin. The work will be supervised by board members who have volunteered their construction experience for the project. Combs said a few groups already have committed to the work, though final dates have not yet been set.

“We are currently looking at having several weekends in the spring that volunteer work groups can come spend the day if they want to or spend the night,” he said. “But what we’re really hoping is whether it is a youth group, a men’s group, or a women’s group, just come and enjoy a nice spring day, and think a little bit about missions and help us out.”

How to donate to the nurse’s station project

For more information or to get involved, call the camp at 405-542-6967 or email canyoncamp@okumc.org.