Football star James Houchin of Lone Grove High School signed to play for East Central University, Ada, Oklahoma, and resolved to find "somewhere to keep my head on straight" when he got there. He found the United Methodist Wesley Foundation.

Now he’s not only starting as right tackle for the Tigers but also serving on a leadership team that pairs Wesley Foundations on two campuses.

The Wesley in Ada is partnering with its peer in Durant, the Wesley Foundation at Southeastern Oklahoma State University, with Janey Wilson as their executive director, officially beginning June 1.

It’s unusual to organize campus ministries that way. Greg Tener said, "Good things are moving so quickly, so it has to be God."

He is Heartland District Superintendent and Cabinet representative to the Conference’s Board of Higher Education and Ministry. He’s been active on the board since the 1990s.

"Seeing the turnaround that’s taken place at the Ada campus" under Wilson’s leadership led the board to launch this approach for the Wesley campus ministries in the Lake Country District, according to Rev. Dr. Tener. The model also responds to budget changes.

Wilson began directing the Wesley at ECU, her alma mater, in 2014. Like Houchin, she grew up in Lone Grove. She has more than 10 years of leadership experience in United Methodist camping, including as a dean; was an Oklahoma lay delegate to the 2016 General Conference; and is an associate Conference lay leader.

Only about three students attended worship at the ECU Wesley when Wilson arrived, according to Houchin.

Now 20-30 regularly worship on Monday evenings, he said. Six students serve on the leadership team, which includes speaking in churches on Sunday mornings. Houchin is the Wesley’s ministry intern.

"It’s really humbling to be around this atmosphere during college," he said. His increasing involvement in life at the Wesley led to his baptism at his home church in Lone Grove.

"I feel trying to continue to make your relationship with Christ bigger helps. You know you have somebody to lean on."

The Wesley serves Random Snacks of Kindness and collects prayer requests in a box at the university’s student center. Snow cones and opportunities to play with puppies attracted students when fall classes started. Ty Darlington, a University of Oklahoma award-winning athlete and graduate, gave his Christian testimony in an ECU appearance. The ministry entered a float in Ada’s holiday parade.

"We’ve tried really hard with our outreach program to get on campus and keep our name everywhere," Houchin said.

He’ll be one of three key people in the joint project. Houchin and Devon Taylor will be associate directors, in charge of programming at ECU and SE respectively, guided by Wilson.

Taylor is scheduled to graduate in May at ECU, then move to Durant. Travel takes about an hour and 15 minutes between the cities, Wilson said. 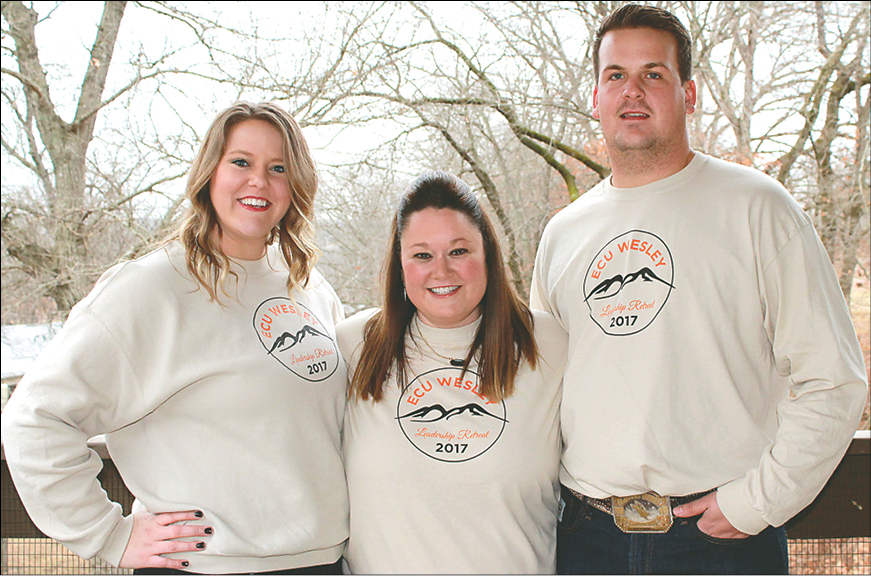