Nature played extreme sports at all three Oklahoma United Methodist camps in 2015, but nobody cheered.

On the final day of the year Canyon sat powerless, even the camp manager’s home. Ice varnished the hillside access road. Broken trees littered the property.

In Egan, fast and heavy rainfall pushed the creek well beyond its boundaries. The floodwaters overwhelmed and severely cracked the swimming pool, tore chunks from the creek banks, and kept rising.

But the game of life outlasts a season. As Contact went to press, Camps supporters were gamely responding with can-do spirit.

They soon will even the score.

Recall when Spring’s record rainfall swelled Lake Texoma, submerging the road into Cross Point. The lingering high water cut off that camp access for 10 weeks. The innovative solution: a summer of "island camps," never to be forgotten, moving people and supplies by canoes and pontoon boats.

Camps’ Executive Director Ed Parker said on Jan. 4, "We’re moving full speed ahead. We plan on operating our camps at capacity this summer."

He looks forward to the arrival of 160 youths and adult sponsors for Camp Spark in mid-January. It is a joint program of Heartland and Crossroads Districts.

"Heat is a wonderful thing," he said. "We’ve been nomads." The Combs family stayed with family and friends during two separate weeks of power outages since Thanksgiving.

That weekend’s storm caused Canyon major damage. It brought ice — lots of it. Numerous trees throughout the grounds shattered under the weight. And Cabin 9 is considered a total loss after a large tree lost its grip on the earth and fell onto that building, Parker said.

Egan Camp Manager Josh Pulver said on Jan. 5, "We’re marching forward on the medical station, so we can have the dedication on March 5." Doors were being installed that day, with plumbers due the next day.

Engineering professionals also were to arrive that first week of January, to assess the bridge damage and land erosion that the flooding caused at Egan as 2015 ended. Pulver said the structural damage was along the creek, with only minimal building problems.

"Who would have ever thought we’d get 15 ½ inches of rain in two days in December?" he asked.

Now "we’re trying to establish Spring Break as our mission time," he said. By then "we’ll have projects groups can work on together, and fellowship."

He posted on Facebook: "We are overwhelmed by the support shown today by our United Methodist sisters and brothers, as well (as) folks from other local churches around the Tahlequah area. Over 85 people, of all ages, came and helped us clean up from the flood. They went above and beyond and helped us with some other projects as well. Thank you, to each of you, for blessing this place with your hard work and love!"

Oklahoma’s camps do have property insurance, but deductibles range from $10,000 to $100,000 depending on the cause of damages, according to Conference Treasurer Brian Bakeman. 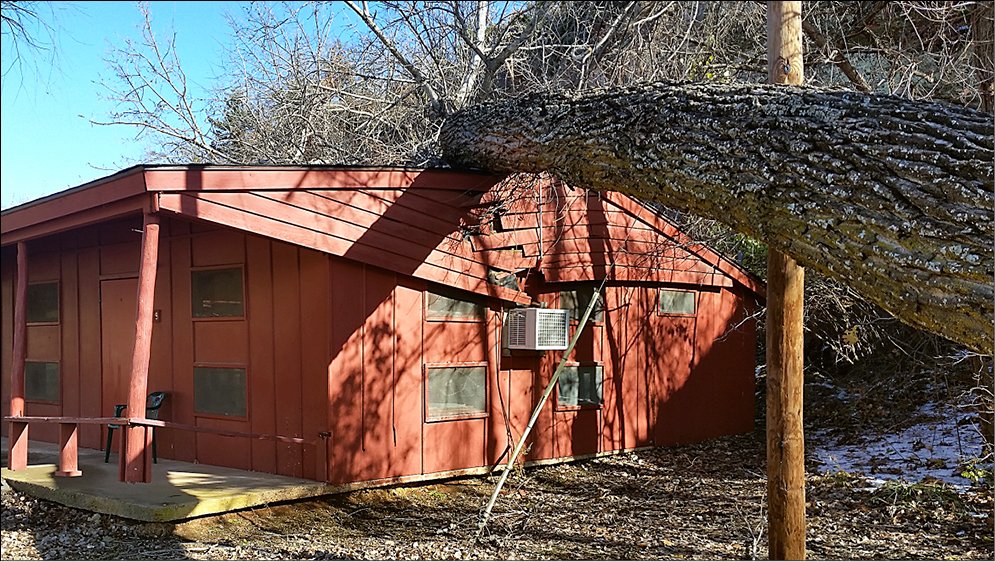 CRUNCH TIME — At Canyon Camp, ice and wind uprooted a big tree during a Thanksgiving storm, and it crashed into Cabin 9 near the swimming pool. Numerous other trees throughout the United Methodist property near Hinton also splintered and fell under the ice’s weight. At Christmastime, another ice storm struck. Power was restored Jan. 3. Then, floodwaters rushed into Egan Camp near Tahlequah on New Year’s Eve, overwhelming and cracking that swimming pool, sweeping away retaining walls along the creek, and damaging a bridge crossing. As Contact went to press, Camps leaders were assessing damages and scheduling volunteer groups to help clean up. Photo by Andrew Himes 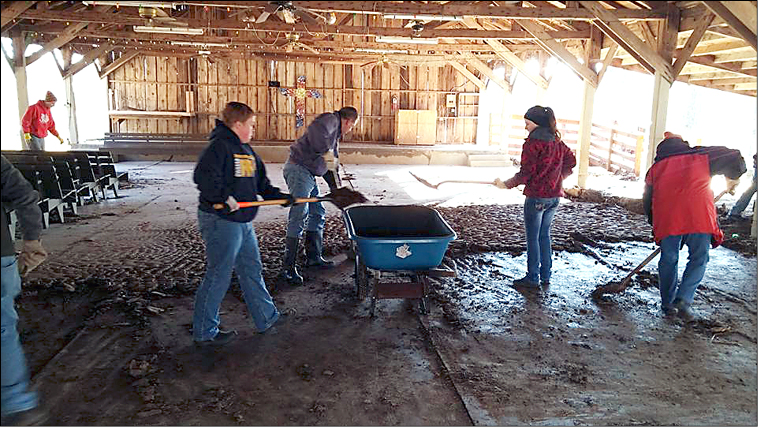 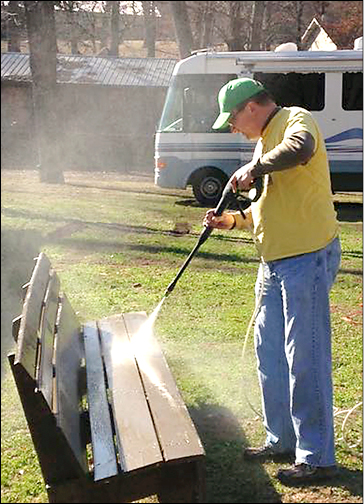 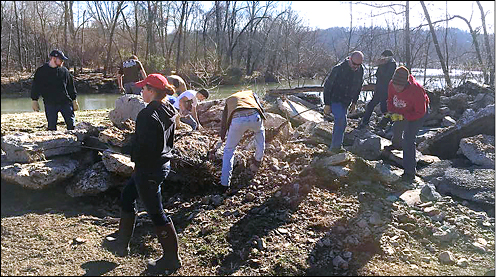 At Egan Camp on Jan. 2, volunteers scrape mud in the tabernacle, power-wash its benches, and haul away flood debris beside the creek.