A full year ahead of schedule, Bethel United Methodist Church near Shawnee paid off the debt on its 10,500-square-feet Christian Life Center.

The mortgage-burning ceremony marking that moment was Nov. 22, with several pastors, the district superintendent, and the bishop in attendance.

Among those present were Leslie Long-Wheeler and Chris Talley, former pastors, and Dan Fletcher, who is both the current and a former pastor.

In the late 1990s, Bethel took "a leap of faith" and made plans to expand, said member Ann Orsburn. Building chairperson was Jim Jenkins; project cost was $180,000.

Today numerous activities at the center serve the wider community, affirming the vision of the church.

The Christmas Family Project, which began in the early 1980s, is one example. The Men’s Group of Bethel UMC steers this community, school, and church effort, and the church’s building is the distribution hub.

The project served a total of 72 children in 31 families in December, he reported.

The men purchased clothing gifts for all the children. Bethel Schools students raised $1,000 to purchase toys. An anonymous $2,000 donation added to the blessings.

Students at all grade levels donated food for the families. Members of the Future Farmers of America helped sort and load the food, with oversight by adult volunteers.

The Men’s Group also provides about 40 school children with food each weekend, Jenkins noted, through the Food in a Backpack program.

"We have had many events in the center," Orsburn said. In 2013, the church became an approved Red Cross disaster shelter. 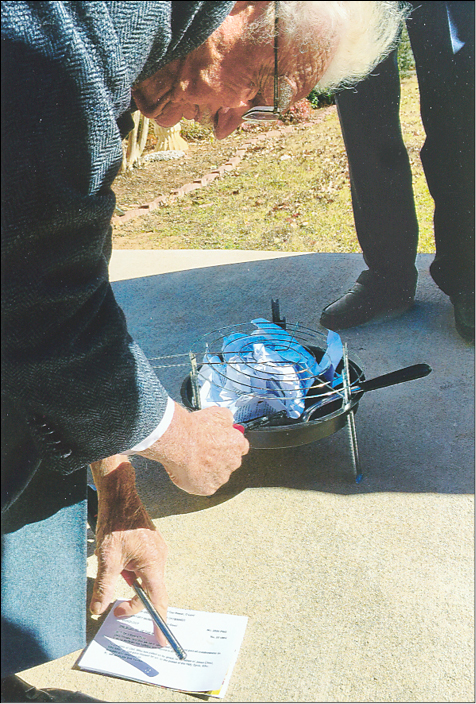 Carl Briggs sets fire to the mortgage for the Christian Life Center at Bethel UMC, during a recent note-burning ceremony.