"I am deeply honored to be named an honorary Kiowa," Henry said.

"We can all learn from the altruism of our great Indian nations, especially those in Oklahoma. As our greatest historian Dr. Angie Debo noted, the tribes have a ‘genius for collective effort.’"

During the ceremony, Henry read Kiowa poet N. Scott Momaday’s prayer from "In the Bear’s House."

Momaday previously wrote a poem honoring Henry, titled "To a Man Among Us," which Sahmaunt read at the ceremony.

Missionary Marsha Alexander, director of Asbury College in the Philippines, will be in Oklahoma through June 6 to visit her supporting churches.

The school, on the island of Anda in the northern Luzon Province of Pangasinan, has more than 400 students ranging from elementary level through college. It opened in 1947.

She began her current assignment in the Philippines in 2010. Her missionary support code is 10772Z.

The Heartland and Wichitas District Offices have relocated.

• The new address for Heartland is in Moore at 631 N. Broadway.

• The Wichitas staff moved to another space within the same building in Lawton: Suite B at 811 SW "B" Ave.

Phone and fax numbers are unchanged, according to District Administrators Stacey Sprayberry and Andrea Dollarhite.

Rev. Gaudreau, Class of 1981, serves as director of emotional and spiritual care for the Oklahoma Conference of Churches, an interfaith group. She is responsible for that ministry by OCC in times of disaster. She especially has been training spiritual care responders engaged in long-term care for people affected by May 2013 storms in the state.

At OCU she earned a B.A., majoring in religion.

Saint Paul School of Theology is seeking comments by Aug. 16 from the public in preparation for its evaluation by its regional accrediting agency. The institution will host a visit Sept. 19-20 with a team representing the Higher Learning Commission of the North Central Association.

Saint Paul has been accredited by the Commission since 1976. The team will review the institution’s ongoing ability to meet the Commission’s Criteria for Accreditation.

Mail comments regarding the school to:

The public may also submit comments at www.ncahlc.org. 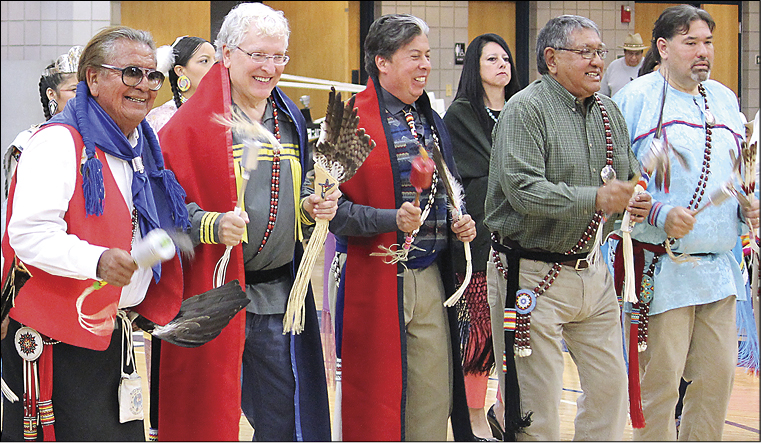