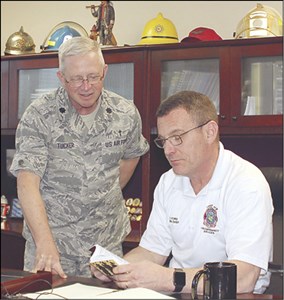 Chaplain Sam Tucker, left, and Fire Chief Terry Ford discuss the book “Strength for Service to God and Community” at Tinker AFB. Behind them are vintage firefighter helmets. photo by holly mccray

OKLAHOMA CITY — Fire Chief Terry Ford keeps a dog-eared devotional book in his briefcase. For this man who heads up the 85-member civilian firefighting service at Tinker Air Force Base, the book’s title “says it all.”

That title: “Strength for Service to God and Community.”

The cover bears silhouettes of a medic, firefighter, and police officer. Daily devotionals inside were written specifically for them, the professionals and volunteers who serve as first responders in crises.

“We’re your first call on your worst day,” said Ford, a firefighter for 36 years.

“We don’t pray for wealth or for safekeeping necessarily. The main thing that we pray for is what this book is all about: strength for service. Give me courage, give me strength to serve God in our community.”

Tinker Chaplain Sam Tucker spoke up in the April interview, quoting a star of the silent-movie era: “Courage is fear that has said its prayers.” The United Methodist clergyman gave Chief Ford the book as a Christmas present.

Both men were pleased to learn more copies of the “Strength for Service” pocket books soon will find their way to more first responders throughout Oklahoma.

All donations to the Annual Conference Special Offering will make that possible. Through the Conference’s Strength for Service effort, the money gifts will purchase books, which local churches then can use to engage with first responders in each community. Your church’s delegates will receive more information.

The story of the “Strength for Service” books begins during World War II, when the Methodist Publishing House produced them for U.S. troops. In 1998, a Boy Scout working on his Eagle project secured support to update and reprint the volume through the General Commission on United Methodist Men.

“I’m a retired Scouter; my son’s an Eagle Scout,” Ford said. “That makes my love of the book even greater.”

On the UMMen’s website, a summary states: “We often forget that after families and friends of victims have been rescued, comforted, or consoled, it is often our first responders who need emotional and spiritual support.”

Ford said he often speaks to young firefighters at academy graduations. His talks include matters of the spirit.

“I can’t quote scripture like a lot of folks, but I am a man of faith,” he said. “I tell them, ‘Responding to a 1-year-old in cardiac arrest or pulling somebody out of a wrecked vehicle or a burning house or an aircraft — that’s not the time to get your religion. You need to come up with your faith early on.’”

He recalled one such God-moment. In 2013, firefighters at Tinker watched a tornado crossing Moore, tracking toward the military base.

Two of the men, new to firefighting and new to Oklahoma, had “eyes as big as dinner plates,” Ford said.

“We circled up, put our arms around each other’s necks, and the chaplain started praying.”

The team watched the storm dissipate over Lake Thunderbird. The rookies’ responded, “Ya’ll prayed that tornado away.”

Ford told them, “I guess the Lord works in mysterious ways.”

The chief recalled the prayer was “for strength for us because we knew what we were getting ready to do. We were going to Moore to do God’s work, and we were going to see some things that we didn’t want to see.”

Firefighters from Tinker spent three days serving as first responders in Moore after that killer storm. Ford said the crew at Tinker partners with local communities in prevention, response, training, and more.

Tucker, who will become senior pastor at OKC-Wickline United Methodist Church in June, said he wants that church and the Tinker crew to work together.

Ford described his choice of career, which he made as a first-grader on a field trip in Bowling Green, Kentucky.

“I got to sit on a fire truck, and I knew from that moment what I was going to do.”

Ford said firefighters “don’t save lives. We’re instruments of God’s power. What we do is extend God’s grace, whether it’s cutting the door off of a car, or putting out a trashcan fire, or responding to a medical emergency. This is all in God’s hands.”

“First-Class Ministry to First Responders”
This is title for one of the afternoon workshops planned for Wednesday, May 30, during Annual Conference. Building upon the book featured in this story, Chaplain Tucker and others in first-response work will give you insights about their work and their spiritual journeys.
Making Disciples of Jesus Christ for the Transformation of the World