Blackwell pastor hopes to give away 100 bikes for Christmas 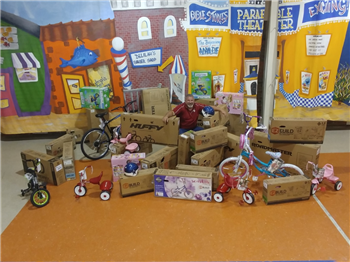 Rev. Richard “Cap” McIlray sits among a collection of bikes donated to Blackwell for a bike giveaway in 2018. He hopes to collect 100 bikes to give away this year.
What started as a simple shipping mix-up has inspired an annual Christmas giveaway.

In December 2017, two bicycles intended for grandchildren in California were sent to Blackwell, Oklahoma by mistake. The company sent replacement bicycles to California, leaving two new but unneeded bicycles with United Methodist pastor Rev. Richard “Cap” McIlnay and his wife. Having no grandchildren in Oklahoma, the couple made a festive decision: host a bike giveaway for kids in attendance at the church’s Christmas Eve service.

“In my mind, there is a childhood memory of Christmas and the best Christmas gift being a bike for a kid,” McIlnay said. “There’s a lot of kids around here that don’t have bikes. It’s a pretty poor community, and bikes are expensive.”

After hearing McIlnay intended to give away the mis-shipped bikes, some members of the church donated additional bikes for the giveaway. The church gave away five bikes in all. Encouraged by the response of the community, the following year McIlnay and a couple others asked businesses in the community to donate bikes for a giveaway.

The giveaway has changed its format as it’s grown. This year, the church will give away certificates that can be redeemed for a bike at Walmart during a birthday party for Jesus held a few days before Christmas Eve. McIlnay hopes the new format will give parents and caregivers time to assemble the bikes. He also looks forward to sharing about Jesus during the event.

“It gives me an opportunity to tell some kids and adults about Jesus who otherwise wouldn’t hear the message,” he said.

McIlnay believes the bikes have had a positive impact on the community. He hopes the giveaway will continue and grow into an ecumenical community ministry.

“I can’t tell you how many people even now come up and tell me a bike made their kids’ Christmas. One lady told me it was the only gift their kid had,” McIlnay said. “For the kids, I want them to walk away with a message of who Jesus is. For me, it’s the kids’ faces… I love to see the kids get excited. It’s looking at a kid’s face on Christmas morning. It doesn’t get better than that.”