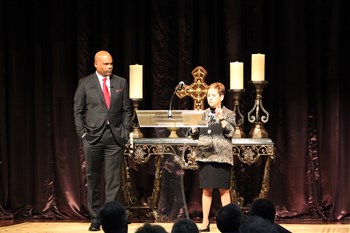 Rev. Junius Dotson of Discipleship Ministries and Bishop Cynthia Fierro Harvey of the Louisiana Annual Conference share about the Protocol of Reconciliation and Grace through Separation during the South Central Jurisdiction Delegate Gathering held Feb. 20-22 at St. Luke's UMC in Oklahoma City. Photo by Jaime Montgomery.

Delegates from the South Central Jurisdiction of the United Methodist Church met on Feb. 20-22 to interview candidates for bishop and discuss matters relating to the 2020 General Conference, a meeting of the denomination’s top law-making body, taking place May 5-15 in Minneapolis.

A major part of the weekend was hearing about the Protocol of Reconciliation and Grace through Separation. Rather than explain recently released legislation for the protocol, representatives of the jurisdiction’s College of Bishops focused on how and why they made the decision to support the protocol.

Bishop Cynthia Fierro Harvey, episcopal leader of the Louisiana Annual Conference, opened the presentation by sharing about the thought process and reasoning behind the protocol.

She was joined by Rev. Junius Dotson, the chief executive of Discipleship Ministries. Both Harvey and Dotson, who were a part of the mediation process that led to the protocol, acknowledged that separation was not their ideal choice in addressing theological differences surrounding LGBTQ inclusion.

“I must tell you, that is not what I signed up for,” Harvey said. “I never thought I would be in a group that would be at this point, but it became very clear that [separation] was the next step that we needed to take.”

Dotson explored some financial aspects of the protocol, including the protocol’s allocation of $39 million to ensure ministries like Africa University would not be impacted by an interruption in funding during the separation process. He said the committee approached the financial implications of the protocol by examining what would be needed for new, healthy expressions of Methodism post-separation.

“We’re anticipating that there will be a need for a budget reset,” Dotson said. “There’s a need for innovation. There’s a need [to ask] how do we deliver general church ministry in the 21st century. This gives us a way and a timeframe that makes sense.” 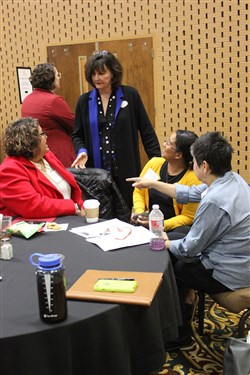 “The driving question behind Article VI still remains the same: how do we help each other get what we need? The only way this can happen is if we lay aside general conference thinking, which is often about exerting one’s will to create a winner-take-all victory,” Dotson said. “This mediation process was not about winners or losers. It was about how we could all get to yes, and how could we help each other get what we needed? It will take an unprecedented level of cooperation and coordination, but we can get there.”

Bishop Robert Schnase, episcopal leader of the Rio Texas Annual Conference, also spoke about the protocol. He shared how a question posed during a meeting with fellow bishops helped him see a bigger picture.

“Here’s the foundational question of the protocol: Do you fundamentally believe the witness of Christ is multiplied and expressed by two denominations who peacefully separate or by one denomination that continues conflict over LGBTQ inclusion?” he said. “It was an inventory of sorts as one by one, each bishop said, ‘two.’”

Schnase, a member of the Commission on a Way Forward, described how he came to accept the protocol as the best way for the denomination to move forward after restrictions on LGBTQ inclusion were upheld at the 2019 Special Called General Conference.

“The fundamental premise of the One Church Plan was that we can find a space to do our ministries without having to restrict each other,” Schnase said. “It still breaks my heart to think about some kind of divergence, but if there’s going to be one, I’d rather it be one that has some direction, some buy-in, with some thinking behind it from people of various perspectives.”

Schnase noted that the protocol provides a broad timeframe for clergy, churches and annual conferences to decide whether they would like to stay in the UMC or move to a new expression of Methodism that may come out of the protocol. He asked that delegates “give this plan room to breathe.”

“There’s space to live with this for a while to see if this is tolerable,” Schnase said. “[There’s time to ask,] is there room for me in this denomination? Am I still going to feel at home?”

He also asked delegates to be a non-anxious presence when discussing the protocol or General Conference, urging delegates to refrain from trying to “sabotage it with 1,000 things that absolutely must be changed.”

“When these conversations take place, you do the Body of Christ no favors by using fear as a way to create cohesion in community,” Schnase said. “That’s not the way Jesus led.”

Bishop Bob Farr, episcopal leader of the Missouri Annual Conference, closed the presentation by reminding delegates that the denomination has a long history of reorganizing into new expressions of Methodism. He urged delegates to accept living into the uncertainty of the time before the 2020 General Conference.

“I’ve been to five General Conferences, and I’ve never seen anything start the way it ends,” Farr said. “The document you have in front of you is the beginning point, and I don’t know what the end will be. I just hope we don’t pick it apart.”