• Chris Tiger is being named to the new full-time position of director of New Faith Communities.

Rev. Tiger currently serves as Wichitas District superintendent, based in Lawton. Prior to that, he was senior pastor of Owasso-First United Methodist Church, 1998-2013, leading that congregation to phenomenal growth, the bishop stated.

"Chris has served our Conference with distinction and integrity for many, many years," said Hayes. Tiger was ordained in 1985.

The new director will work with new-church planters, districts’ missional strategy teams and superintendents, the Conference’s New Faith Communities Ministry Team, and as part of the Annual Conference Council staff.

• Connie Gibson is being appointed as the new superintendent of the Wichitas District, replacing Tiger.

Since 2009 she has been an exemplary pastor at OKC-Southern Hills UMC, said Hayes.

He said about her ministry, "She is one of the most active and visible pastors we have in our Conference. Her work with the Council on Finance & Administration, as co-chair of the worship committee for Annual Conference, a mentor with the Board of Ordained Ministry, and several other key positions make her uniquely qualified to do the work of a district superintendent."

• Chuck Nordean will become the full-time director of Clergy Development.

He currently serves as the director of both Clergy and Congregational Development.

He will work closely with the Board of Ordained Ministry. He will take the lead in recruiting and nurturing faithful, effective spiritual leaders for Oklahoma and in clergy covenant accountability.

Rev. Nordean was Clinton District superintendent, 2005-’13. He led Edmond-First UMC for eight years prior to that. He was ordained in 1977.

Both Nordean and Tiger will become part of the extended Cabinet and be supervised by the director of Connectional Ministries, Craig Stinson. 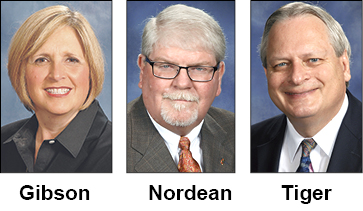