Stepping carefully across the rubble and broken stained glass left by a destructive storm, a helper emerged with precious cargo and handed it to Sue Harshaw — her Bible.

She had left it on a pew behind the pulpit before the storm hit Davis-First United Methodist Church, where her husband pastors.

The storm the night of April 26 destroyed the sanctuary and caused an estimated $780,000 in damage.

"I didn’t realize I didn’t have my Bible until this morning," Sue said the next day. "I knew I could never replace it."

When the book was put back in her hands, "I got really teary-eyed," she said. It has "notes, everything you put in a Bible." She’s had it about 25 years.

And now it’s survived two major disasters — a fire and the destruction of the Davis sanctuary.

The Sunday after the storm, the congregation worshipped outside, with a flatbed trailer serving as a stage, Steve Harshaw said. "The wind was a little cool, but it wasn’t bad."

Church leaders were told the damage to the sanctuary was caused by 90 mph straight-line winds, Steve said.

They’ve been asked to list all that was lost or destroyed. Steve, who has been pastor at Davis for two years, said, "Making a list of that is going to be very difficult."

Before the storm, First UMC had been planning a building expansion. That plan is being revised, Steve said. Under consideration, in addition to a new sanctuary, had been adding a children’s area and relocating restrooms and offices.

The pastor estimates restoring the church will take 18 months to two years. 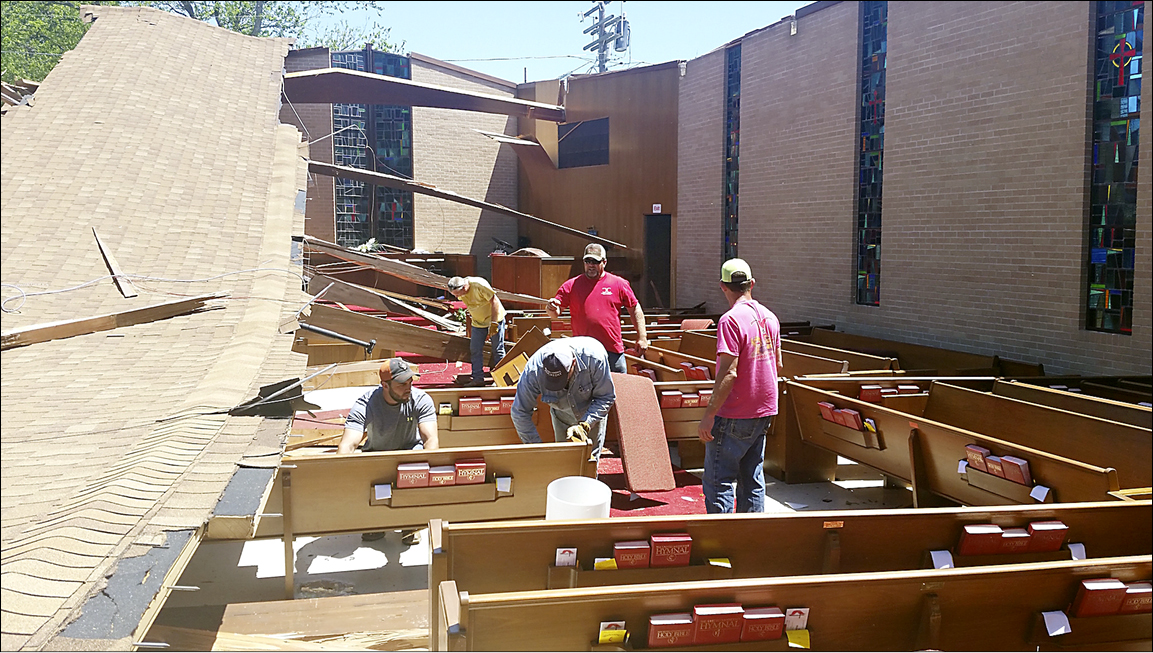 Salvage work begins among the pews April 27 in Davis-First United Methodist Church. The sanctuary roof fell in a wind storm, but some furnishings and books remained intact.