Two are better than one, because they have a good reward for their toil. For if they fall, one will lift up the other; but woe to one who is alone and falls and does not have another to help. (Ecclesiastes 4:9-10)

etter Together" served as the theme of a week of activities held on the Oklahoma City University campus April 3-7. It was part of a national movement sponsored by Interfaith Youth Core, a civic group that promotes understanding and service among people of diverse religious and non-religious identities.

This week provided opportunity for the OCU community to celebrate how the variety of gifts and backgrounds represented on campus makes us stronger.

We began on Sunday with the World Religions Expo sponsored by the OCU Wimberly School of Religion. Students partnered with community members from different houses of worship and denominations to provide information about those faith expressions. Guests moved among displays filling the first floor of the Gold Star Building to learn about those beliefs and practices.

A tent on the campus Quad on Monday offered a photo activity. Individuals and groups wrote messages on a white sign bearing the words "... and we are #BetterTogether," then had their photos taken holding the board. Here’s a sampling.

Each concluded with "... and we are Better Together."

Tuesday was the annual Love Not Hate Day. Dinner was provided by Sodexo, and the student musical group OCUpella performed. Free T-shirts could be tie-dyed.

The monthly Wednesday@theWesley meal encouraged conversation on "How can people of different faiths and those with no faith affiliation build a better community together?"

On Thursday, the Religious Pluralism class sponsored the discussion "Islam and Interfaith," with Ersin Demirci from The Dialogue Institute of Oklahoma City.

Religion major Melaina Riley, a sophomore, organized the week’s events. She is a member and national coach of the Interfaith Youth Core student advisory panel. Better Together Week is one of many ways that OCU models understanding and cooperation as a means to reach out in service to the world. 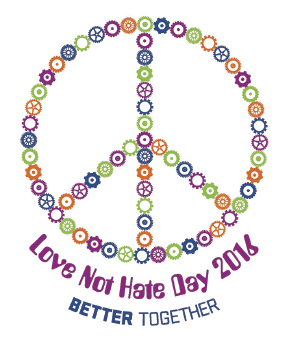 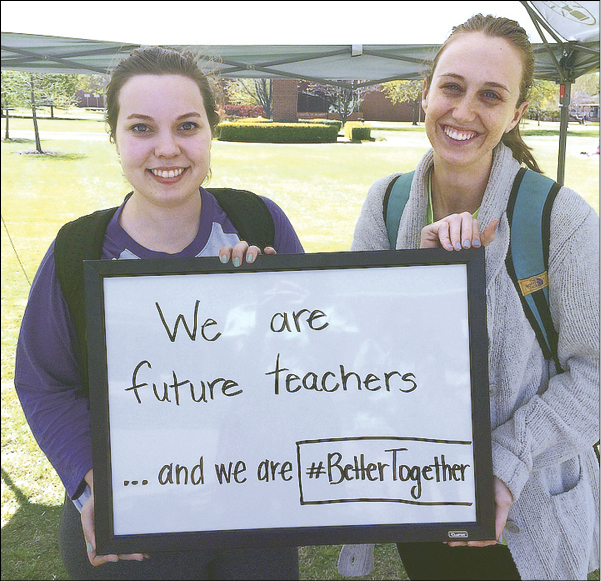