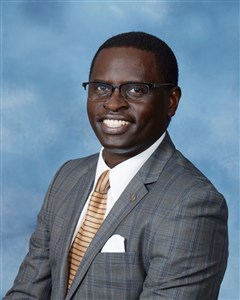 A scholarship at Africa University has been named in honor of a graduate currently serving the United Methodist church in Stroud.

Gérard Nsabimana, who earned a bachelor’s degree in agriculture in 2002, said the honor was very humbling.

“I could not imagine when I was sharing my story with other people I met, that somebody would find it appropriate to go ahead and establish a scholarship in my honor,” Nsabimana said. “I am so grateful and humbled that somebody else heard my story—and that it might be a story from someone else you might get to know—that they wanted to see how they could get more students to achieve their educational goals.”

James and Lou Ann McKimmy, neighbors of the family who helped arrange for Nsabimana to come to the United States to pursue graduate studies, endowed a scholarship in his honor in 2017. The following year he was inducted into the university’s legacy society, the first graduate to receive the honor.

Nsabimana fled warfare in his native country of Burundi in 1995 before enrolling in AU in 1997. He believes the scholarships he received as a student made his education possible.

“Without a scholarship, there’s no way I would have been able to graduate from Africa University,” he said.