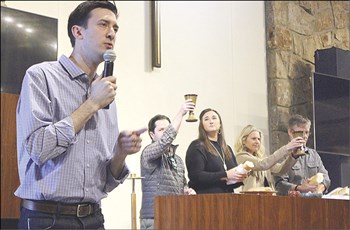 From left: Jon Odom blesses the Holy Communion elements, assisted by Spencer and Libby VanDolah and Kristen and Chris King at Cornerstone. Photos by Holly McCray.
BY HOLLY MCCRAY
TULSA, Okla. — On Jan. 21, Cornerstone greeted its first-day crowd all prayed up. Pastor Jon Odom said the launch team spent 800 hours in prayer before the opening of this satellite of Tulsa-Asbury United Methodist Church.
“We’ve prayed that you come eager. In the name of Jesus, you are welcome,” said Rev. Odom.
More prayers wove themselves throughout the worship hour. And Odom spoke of “a neat sense of teamwork” among the Tulsa churches. He received text messages that Sunday from Tulsa pastors of varied denominations, assuring him that they, too, were praying for Cornerstone’s debut. “It’s all for God’s kingdom,” he said.
Cornerstone launched in midtown Tulsa in a sanctuary and classrooms at 4803 S. Lewis Ave. Perhaps another sign of greater kingdom purpose is the location itself. The rented space, including an office, is in the ministry center for the Lutheran Arkansas-Oklahoma Synod.
Chris Tiger, who is the Oklahoma Conference’s director of New Faith Communities, noted that the satellite’s leadership wanted to take root in “sacred space.” Some church plants start in schools or retail storefronts.
Cornerstone’s use of technology in worship matched up with the young families swelling the audience of 276 that first Sunday.
“Take out your cellphone and text here or new to (phone number),” Odom instructed them. Attendance was recorded and contacts secured in one swift moment. During the offering time, screenshots displayed how to donate online or by text while small buckets were passed along the rows of people.
This brand-new faith community in Tulsa also receives support from the Oklahoma Conference and the Council Oak District.
“I can tell you that the entire Oklahoma Annual Conference is paying attention to our willingness to step out in faith for the kingdom!” Odom declared in a Jan. 16 email to the satellite launch team, about 50 people. He reports regularly to Rev. Dr. Tiger and the Oklahoma Conference New Faith Communities Committee, chaired by Mark Foster.

Odom’s email continued: “In some ways, we’ve deviated from the standard script for how to launch a new church … A group of us has been memorizing scripture, slowly and steadily sowing hours of prayer and making personal invitations of people who don’t know Jesus or aren’t in a church … And already some of the people we’ve been reaching out to and praying for have started meeting with the launch team, not wanting to wait until the official launch.”
Odom also stated, “THANK YOU (yes, in all capital letters) to Pastor Tom (Harrison) for having a missionary spirit, for encouraging us to take steps of faith in this mission of helping others follow Jesus.” Rev. Dr. Harrison is Asbury’s longtime senior pastor.

In the email, Odom described types of people to whom Cornerstone is reaching out. This is paraphrased:
A month ago, Anne* sent a suicidal text message to her family. They spent all night driving around, trying to find her before she took her life. They found her. She’s been at Cornerstone in recent weeks. I ran into her at a concert; she came straight up to me and said, in a slurred voice: I’m going to see YOU on SUNDAY! And then she gave me a fist bump. Praise God for drawing in Anne. We started Cornerstone for Anne.
Chris* grew up in church, but hadn’t been back since graduating from high school over a decade ago. He’s married and has children. His parents, on our launch team, have been earnestly praying for him for years. Recently Chris and his family have been meeting with the team. He and his wife are now in discipleship groups. When the launch team met together to worship, Chris read scripture and prayed for my message. We started Cornerstone for Chris.
Derek* moved to Tulsa a few years ago for work. He’s curious about God, but thinks it would be embarrassing if someone he’s dating finds out he’s associated with church. He’s not sure what or if he believes. He has been loosely around Cornerstone for a few months, perhaps out of deference to his good friend who is on the launch team. God is clearly working in him. We’re praying for Derek to throw himself headlong into following Jesus. We started Cornerstone for Derek.
Cornerstone chose its name from 1 Peter 2:6.
“We know that everyone is building a life around something,” Harrison wrote to the Asbury community in an August e-newsletter. “Will you pray that God would use the ministry of Cornerstone to help others in midtown Tulsa follow and build their lives around the precious cornerstone of Jesus Christ?”

Looking ahead to Easter

The satellite’s staff includes Danae Castle, children’s director, and worship leaders Ben and Noelle Kilgore.
Odom told worshippers Jan. 21 that he will preach from the Gospel of John through Easter. “Everything we want to know about God comes back to Jesus,” he said.
“We need a hard reset on our spiritual operating systems. I hope people walk away with curiosity about Jesus.”
Website is www.CornerstoneTulsa.org.
(*not real names)