As one door closes, another opens in OKC 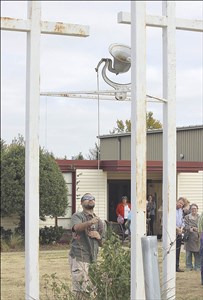 Eric Brown, lay leader of OKC-Mosaic, rings the church bell as worshippers exit the deconsecration service for the former Clegg/Mosaic North property. Photo by Holly McCray.
BY HOLLY MCCRAY
OKLAHOMA CITY — God’s people broke bread together twice Nov. 5 as they said farewell to the place that was the longtime home of Leland Clegg United Methodist Church and, more recently, Mosaic UMC and North OKC Native American Fellowship.
Between a potluck meal and the Communion ritual, some life-transforming stories they told dated back a half century.
J.C. Sanders moved from Chicago to OKC in the 1960s. The African-American family began worshipping at an unnamed church but was told “not to come back,” he recalled.
Then someone from Clegg UMC invited the family there.
Sanders wrestled with that. He “was up all night. It was an all-white church.”
They went to Clegg. “Six kids grabbed my kids and …” away they happily went together. The family had found its church home.
Janet Sanders was age 9. “We were very much included when we came here,” she said. “I only realized (recently) what I got at a little church.”
Rob May, the son of charter members Bob and Lawanda May, recalled his first acting experience was at Clegg. The youth group staged “A Charlie Brown Christmas.”
“My youth was spent here. I got married here; both my kids were baptized here. God bless you all for helping us grow up as Christian people,” he said.
Kay Griffin said she has been church organist since 1977. “The Father Will Dance” became a favorite song, especially when welcoming babies, she said. A choir sang it at the recent Service of Leave-Taking.
Marlene and James Brown joined in the 1980s; daughter Deidre was age 12. Marlene has been secretary of United Methodist Women many years. Her grandson Eric now serves as Mosaic’s lay leader.

Pastor Scott Spencer of Mosaic UMC said he’s “in awe of the legacies” from the Clegg church.
Among clergy present at the November service were Patrick McPherson, son of founding pastor Doug McPherson; Marla Lobo, Clegg’s last pastor; and Murray Crookes and Donna Pewo of the Native American Fellowship.
Superintendent Rockford Johnson of the Crossroads District declared the property deconsecrated and reflected on the stories he’d heard.
“All of those expressions of love have become part of the heart of God,” he said.
Clegg and Epworth United Methodist Churches in Oklahoma City merged in late 2015, becoming Mosaic UMC. The Epworth property was sold.
For a time, Mosaic held worship at Oklahoma City University’s Smith Chapel. Its offices and weekday programming were at the former Clegg property, 102 E. Hefner Rd., called Mosaic North. That’s also where the Oklahoma Indian Missionary Conference fellowship met.
In June, Mosaic relocated to share space with OKC-Mayfair Heights’ United Methodist Church, at 3131 NW 50th. In November, the Native American congregation also moved there.
The 4-acre Clegg property will be sold.
Mayfair Heights holds Sunday worship at 9:30 a.m.; Mosaic, at 10:45 a.m.; and the Native American fellowship, at 11 a.m. An administrative assistant maintains a master calendar!
A Halloween trunk-or-treat event drew about 400 people. On Nov. 19, the three congregations in one location held a joint service of thanksgiving and a shared meal.
Mayfair Heights Pastor Crystal Hughes said, “I think this has made a huge, positive difference in my congregation. There’s a renewed sense of purpose, excitement. They feel closer to God because they get to see God in the faces of different people.”
She continued, “Mayfair Heights’ congregation is older yet interested in doing new ministries.”
Mosaic’s worship attendance is about four times larger than Mayfair Heights’, said Rev. Hughes.
“We knew we needed more space, and so we’re very very grateful that Mayfair Heights opened their space up to us,” said Rev. Spencer. “Very quickly we felt at home here.”
Through the summer, a joint team led by the pastors developed a covenant agreement. The work included theological matters. Mosaic is an official Reconciling Congregation; Mayfair Heights is not but agreed to honor the fact that Mosaic is, Hughes said.
Making Disciples of Jesus Christ for the Transformation of the World