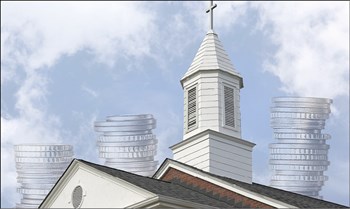 ILLUSTRATION BY LAURENS GLASS, UNITED METHODIST NEWS SERVICE
BY HOLLY MCCRAY
Churches sent $12.8 million in Apportionments supporting ministries in and beyond the Oklahoma Conference in 2017. They funded 88.46 percent of the total budget of $14.5 million.
Soon after Treasurer Norma Quinn reported those numbers, Bishop Jimmy Nunn spent an evening signing thank-you letters to the 358 churches that paid 100 percent of their apportionments.
“I enjoyed reviewing the accomplishments, praying for the churches, and signing certificates,” Bishop Nunn said. “I greatly appreciate the large number of churches that are participating at 100 percent. I say thank you to those folks.”
He had a question for congregations that did not contribute fully: How can we help you? A total of 477 churches are assessed apportionments in the Conference.
“Are people responding as faithfully as they can?” the bishop asked. “The goal is still 100 percent. I look forward to signing more letters next year.”
His desire isn’t fantasy, doesn’t disregard an annual decline in the percentage of apportionment giving, charted since 2008. Oklahoma’s leadership is acting in concrete ways to turn around that statistic.
The bishop said that overall Conference ministries have been directed to reduce their expenses, toward a 2019 apportionment proposal at least 3 to 5 percent lower than this year’s total, which is $14.3 million.
The Council on Finance and Administration (CFA), chaired by Robert Gorrell of Lawton, will meet March 20 to consider finalizing a proposal for Annual Conference. In April and May, Rev. Dr. Quinn will lead “Unpacking the Budget” sessions at pre-conference meetings in all districts. Annual Conference delegates will vote in late May.
Fixed costs: General/Jurisdictional funds
Oklahoma’s annual budget includes fixed apportionments for denominational and jurisdictional (regional) ministries of the Church. There are six General Church funds and three jurisdictional funds, amounts set every four years by delegates at those respective conferences.
Those ranged from $43,000 to more than $2 million in 2017.
Among the General Church apportionments, Africa University received the highest percentage of funding support from Oklahomans: more than $42,000 (86.7 percent). The Interdenominational Cooperation Fund received the least: $34,000 (79.45 percent).
In the South Central Jurisdiction, Lydia Patterson Institute is a border school in El Paso, Texas. The mission received more than $58,000 (91.12 percent) from Oklahoma’s churches.

Among Oklahoma Conference ministries that are undergirded by apportionments, their 2017 budgets ranged from $5,007 to $1.4 million. Two received more than their apportioned totals: Neighborhood Services Organization ($15,429) and Project Transformation ($5,789).
Funding for Cookson Hills Center and Skyline Urban Ministry reached 99.76 and 97.61 percent respectively.
New Faith Communities received $757,419, and New People New Places, $895,296.
Apportionment support by percentage for all other Oklahoma ministries ranged from 81.06 percent for Oklahoma City University ($557,528) to 90.69 percent for Circle of Care ($508,096). The apportionment concluded in 2017 for Saint Paul School of Theology at Oklahoma City University; the United Methodist seminary received $186,824 (86.86 percent).
Receipts for required ministerial support funds, including the Retired Clergy Health Fund ($1.5 million). totaled about 98 percent for each of those items.
These numbers do not include any district apportionments, which were not being tracked by the Conference. However, the bishop said those now are being integrated into the accounting system and will be reported at Annual Conference, for information.

The bishop directly addressed the ongoing slide in apportionments, since a record high 97.36 percent in 2007.
He said he will propose a change in Oklahoma’s apportionment system to the Council on Finance and Administration — “a bridge proposal … a fixed percentage ... so everybody shares equally and knows they do.”
He explained by offering one possible scenario: Based on the Conference’s 2018 budget total, which is a fixed number, reduce the overall 2019 budget total by 3 percent, and also reduce by 3 percent each church’s total apportionment in 2019 from that church’s 2018 total apportionment.
The bishop attended the Council on Finance and Administration meeting in late January, where he listed several general policies for review by that group. Here are some of those he named:
The practice of “cascading asks,” in which a ministry solicits funds at the Conference, district, local church, and individual levels.
What is the relationship between Conference and district budgets?
Conference subsidies for activities rather than participants bearing the cost.
Conference subsidies for programming.
Conference personnel costs and fixed costs.
In a February interview, Nunn said, “I think that an intentional examination of everything and a measured approach to our budget is the way to go ... People give to special initiatives, respond emotionally, and they’re generous. People generally don’t want to pay for infrastructure, but if you don’t have the infrastructure, you don’t have the ministry.
“Everything is valuable. What is vital? How do we fund what’s vital?”

Treasurer Quinn said Oklahoma’s current apportionment system, which is decimal-based, hasn’t been revised since the 1980s. Systems vary among annual conferences, and success rates differ widely, she said.
A task force of the Council on Finance and Administration began meeting in August to review Oklahoma’s system.
Both Quinn and Nunn applauded a successful year for the Conference’s investment funds, which include the clergy pension fund and Woodworth Estate, among others.
“Interest that we received was a little over $6 million,” Quinn said. “In 2016, it was $3.8 million.”
The Oklahoma United Methodist Foundation and Wespath “do a great job of looking at the market and investing wisely,” she said.
Ultimately, that interest helped offset the shortfall in apportionments, with an additional $161,000 from the Conference’s contingency fund, Quinn said.

Tell the story of Christ

Nunn cautioned that statistics without context aren’t meaningful. “We’ve got a lot of people who are doing their very best, and we’re moving the Church forward.
“Twelve percent of the apportionment goal did not get paid in. Is our success or failure as a Church dependent on that one marker?” he asked. “If we’re about losing ourselves for the sake of bringing people to Christ (Matthew 10:39), for serving people who have no means to ever say thank you but somehow their lives are changed … it’s hard to put that in a statistical table.
“We have the obligation to look for the fruit of our investment, and we fund fruit.”
Districts Pre-Conference Meetings (with Norma Quinn and Board of Laity leaders)   Return to Contact Digest
Making Disciples of Jesus Christ for the Transformation of the World